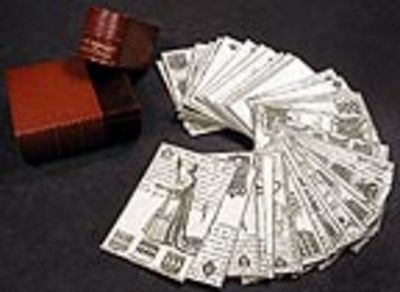 by PLAYING CARDS
1720. 1 engraved dedication/explanation leaf (3 3/8 x 4 7/16 inches), 52 engraved cards (each 3 3/8 x 2 3/16 inches), each backed on 19th-century card. All contained within a single early 20th-century brown straight-grained morocco slipcase modelled as a book and titled in gilt on 'spine' Provenance: Later ownership notation on verso of each card A very rare complete set of early 18th-century playing cards, intended as an illustration of heraldry in France. Later issue of this ornamental set of numbered playing cards in the French suit system (hearts, clubs, diamonds, spades), after a presumed first of 1712. The set as a whole is intended to offer a simple explanation and illustration of the science of Heraldry, with each of the cards featuring one or more shields. These shields are used as a demonstration of a particular heraldic term, but also include a caption naming the French family whose arms they represent. A number of the cards are enlivened by one or more figures. This set is likely to be from one of three known issues of the Carte Methodique recorded by the Cary Collection at Yale University. In each of the three known sets, the imprint of the publisher appears printed on the whole sheet of cards. For the present set, this information was lost when the sheet was cut to form the present fifty-three separate cards. Cary Collection, FRA sheet 177,197; GER sheet 242; Albertina 1974, 3, p.167; S. Mann 1966, p.133. (Inventory #: 15332)
$5000.00 add to cart or Buy Direct from
Donald A. Heald Rare Books
Share this item
Donald A. Heald Rare Books
Offered by