A View in Lyme Park (With that extraordinary Custom of driving the Stags;) the property of Peter Legh Esqr 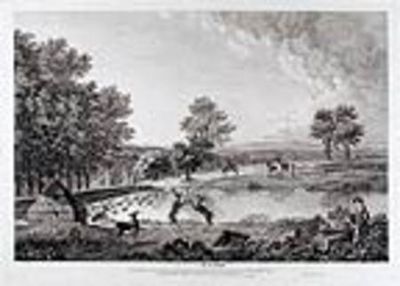 by SMITH of Derby, Thomas (c.1720 - 1767) Engraved by Francis VIVARES (1709-1780)
1745. Copper engraving. Very good condition apart from some overall light soiling, mild creasing, and a few skillfully repaired small tears in the margins. A picturesque view of Lyme Park in Cheshire, the ancestral estate of the Legh family, after the celebrated landscape artist Smith of Derby. This beautifully rendered print is one of 23 plates Vivares engraved after Smith. Towards the middle of the eighteenth century, a trend developed among English artists and printmakers who sought to visually record the natural beauty of England and Wales. Sparked by a sense of national confidence and patriotism, English printmakers began to publish topographical prints of the important sights in the British Isles. In addition to being a visual record of the countryside they were meant to encourage public recognition of the beauty and history of England. They were aimed at English and foreign tourists who desired a memento of their travels, or at those armchair travelers who collected topographical prints instead of traveling. One of the earliest and most influential landscape artists to begin this trend was Thomas Smith who came to be known as "Smith of Derby." Smith traveled the north of England painting famous houses and beautiful views. He was one of the first artists to depict wild landscape scenes, which became immensely fashionable with the development of the "picturesque landscape" towards the end of the century. Smith's paintings not only captured the English countryside at the onset of the Industrial Revolution, but also recorded the activities of visiting tourists and local inhabitants. These works capture a period in England's history, which was forever changed by the wheels of progress. Before the mills and the factories came to dominate the landscape of northern England, Smith depicted its wild beauty and breathtaking scenery. This beautiful view of the bucolic scenery of Lyme Park is a lovely example of Smith's superior work. As the title states, the practice of driving the stags through what was called "Stag Pond" each year at Midsummer was indeed extraordinary. There were large herds of red deer and wild cattle on the property, and at some point it became traditional to drive the deer around the park, ending with the swim through the pond. The last stag has just entered the water and two of the first in line are having a brief skirmish (though it looks rather like a dance). We have not yet discovered the purpose of the summer swim. Clayton, The English Print 1688-1802, p. 155-157. (Inventory #: 13659)
$1200.00 add to cart or Buy Direct from
Donald A. Heald Rare Books
Share this item
Donald A. Heald Rare Books
Offered by