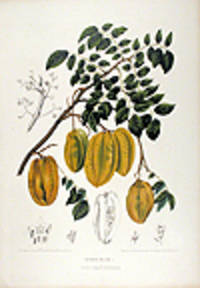 by HOOLA VAN NOOTEN, After Berthe (1840-1885)
Brussels: C. Muquardt, 1885. Chromolithograph, by P.Depannemaeker. Very good condition apart from a few light foxing marks. A fine example of the spectacular botanical work by Berthe Hoola Van Nooten, from 'Fleurs, Fruits et Feuillages Choisis de l'Ile de Java'. Also described by some as the Apple tree of India, the Bilimbi is one of the chief species of the Oxalideae order. It originated from Indonesia, most likely in the Moluccas, and is commonly found in Burma, Singapore, Malaysia, Thailand, and India. Its acidic fruit is frequently used for stain removal and as a main ingredient in pickle relish and chutney. Still in her early twenties, Berthe Hoola Van Nooten had accompanied her husband to Jakarta (Batavia), capital of Java, where he soon died. She was left with debts to pay and a family to support. With great ingenuity, she managed to get a selection of her paintings chromolithographed and published under the title Fleurs, Fruits et Feuillages Choisis de l'Ile de Java Peints D'Après Nature, the first edition of which appeared in 1863-4. "Van Nooten was clearly more than competent, for the splendid tropical plants... have been depicted with great skill. She managed to accentuate the splendour of each species by adopting a style that combined great precision and clarity with a touch of neo-Baroque exuberance, revelling in the rich forms and colours of the tropics." (L. Tongiorgi Tomasi An Oak Spring Flora p.330) Cf. Nissen BBI 931; cf. Stafleu & Cowan TL2 3025; cf. L. Tongiorgi Tomasi An Oak Spring Flora 87. (Inventory #: 12572)
$800.00 add to cart or Buy Direct from
Donald A. Heald Rare Books
Share this item
Donald A. Heald Rare Books
Offered by