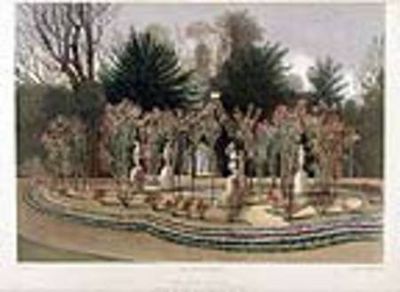 by BROOKE, After Edward Adveno (1821-1910)
London: Published by T. McLean, 1857. Colour-printed lithograph, heightened with touches of gum arabic. Very good condition apart from some light foxing. Top of sheet trimmed practically to image. A stunning view of the rose garden at Nuneham Park, from the "The Gardens of England." Published in 1857, The Gardens of England is a series of 24 plates with accompanying text depicting the diverse luxuriant gardens of various distinguished English mansions. The mid-nineteenth century was a period during which the traditional aesthetics of garden design underwent a significant change in England, as innovative ideas and concepts were being continually introduced and explored. Brooke's publication embodies the eclectic nature of Victorian garden design and constitutes an important visual survey of the varied styles that were popular among the wealthy and fashionable. Situated near Oxford, Nuneham Park was the chief residence of the First Earl Harcourt, nobleman, Privy Councillor, and courtier of George III. The lavish Palladian Villa was built in 1756, and the expansive landscaped park, with its scenic vistas and classical gardens, was constructed in the 1760s according to the Earl's designs. The eminent English landscape designer Lancelot "Capability" Brown enhanced the grounds in his signature "serpentine" style, and William Mason designed its various flower gardens. Little is known about E. Adveno Brooke, other than that he exhibited at the Royal Academy and British Institution between 1853 and 1864 and his most significant publication was The Gardens of England. Cf. Abbey, Scenery of Great Britain and Ireland 392; cf. Benezit, Dictionnaire des Peintres, Sculpteurs, Dessinateurs et Graveurs, Vol. 2, p. 842. (Inventory #: 13866)
$1200.00 add to cart or Buy Direct from
Donald A. Heald Rare Books
Share this item
Donald A. Heald Rare Books
Offered by