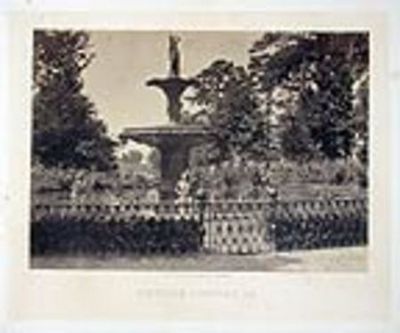 by BARNARD, George N. (1819-1902)
[New York, 1866. Albumen photograph from a negative taken in 1866, 10 x 13 inches, on original two-tone gilt-edged thin card mount, 16 1/8 x 20 inches, with plate title and photographer's credit. A fine copy of a stunning image from Barnard's 'Photographic Views of Sherman's Campaign', an album which is one of the two greatest photographic monuments to the Civil War and 'a landmark in the history of photography' (Keith F. Davis). A contemporary reviewer wrote of this image and its companions: 'These photographs... surpass any other photographic views which have been produced in this country - whether relating to the war or otherwise' ('Harper's Weekly', 8 December, 1866, p.771) This image comes from George N. Barnard's album titled Photographic Views of Sherman's Campaign, embracing scenes of the occupation of Nashville, the great battles around Chattanooga and Lookout Mountain, the campaign of Atlanta, March to the Sea, and the Great Raid through the Carolinas (1866). This album, together with Alexander Gardner's Photographic Sketchbook of the Civil War (1866) are the two greatest photographic monuments of the Civil War. Between them, they contain some of the most famous images of the War. Though some of Barnard's photographs in this series offer poignant reminders of the trail of destruction left across the Confederacy by General William T. Sherman's army in 1864 to 1865, the photographs in Savannah record that beautiful city's avoidance of destruction. The Confederate Army evacuation and subsequent civilian surrender saved Savannah from the destruction of bombardment and the agony of siege. This splendid fountain (Forsyth Park Fountain, which is still standing) in a peaceful park, handsomely photographed by Barnard, evokes the blessings of peace and creativity rather than the viciousness of war. Two Federal soldiers can be seen enjoying the beauty of the scene in the background. Cf. De Renne p.1317; cf. Howes B150, "b."; cf. Sabin 3462; cf. Taft Photography and the American Scene pp.232 & 486. See also: George N. Barnard Photographic Views of Sherman's Campaign... with a new preface by Beaumont Newhall New York: 1977 Keith F. Davis. George N. Barnard Photographer of Sherman's Campaign Kansas City, Miss.: 1990. (Inventory #: 13190)
$3000.00 add to cart or Buy Direct from
Donald A. Heald Rare Books
Share this item
Donald A. Heald Rare Books
Offered by