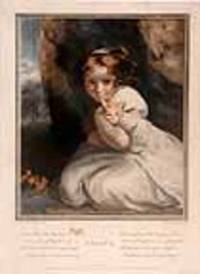 by REYNOLDS, Sir Joshua engraved by Joseph COLLYER (1748-1827)
London: Published by W. Dickenson, New Bond Street, J. Cary, Strand, M. Darling, Newport Street, T. Simpson, St. Paul's Church Yard, & J. Collyer, No. 16 Dorrington Street, Cold Bath Fields, 1790. Colour-printed stipple engraving. Printed on thick laid paper. In excellent condition with the exception of being trimmed within the platemark on all sides. Image size: 10 ¼ x 9 3/8 inches. A beautiful stipple engraving by Joseph Collyer after Sir Joshua Reynolds's famous painting, "Felina". "Felina" was Reynold's niece, Theophila Palmer, known as Offie. She and her sister, Mary, were daughters of his widowed sister and spent much of their youths in his care, in fact, Mary was his primary heir. The ever cheerful Offie appeared in several paintings and brightened the Reynolds' household until she married a Mr. Gwatkin and began a household of her own. Joseph Collyer (1748-1827) was a popular London engraver who acquired a reputation for his remarkable skill with the burin. He learnt the art of engraving from Anthony Walker, but was soon employed by Boydell. He was a valued member of the Society of Arts, and exhibited regularly at the Royal Academy. He was favored by Reynolds who commissioned him to reproduce a number of his most famous paintings, including this enticing image of Felina. In 1786 he was elected an associate engraver and was appointed official engraver to Queen Charlotte, and in this capacity he produced many fine court portraits and historical scenes. He last exhibited at the Royal Academy in 1822, having earned a reputation as one of the most skilled engravers in London. This charming image of a young girl with a kitten is a superb example of early colour printing in England, which was developed as a means of reproducing the effects of painting in oils. This impression exemplifies the single plate colour printing technique used in England at the close of the 18th century. The effect is achieved by inking a single plate with several different colours by using a rag stump, this process is known as a la poupée. The outcome achieved by this laborious method of inking has a wonderful painterly effect and creates a delicacy of image that is charming to behold. Dictionary of National Biography. (Inventory #: 15338)
$400.00 add to cart or Buy Direct from
Donald A. Heald Rare Books
Share this item
Donald A. Heald Rare Books
Offered by