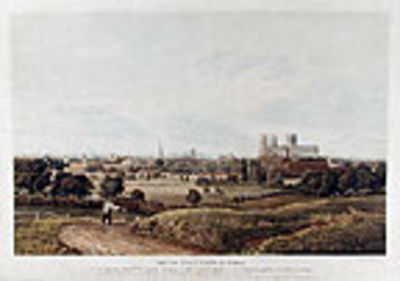 by HAVELL, Robert (1769-1832) after Henry CAVE (1779-1836)
1816. Colour printed aquatint with hand-finishing. Printed on wove paper. In good condition with the exception of being trimmed within the plate mark on all sides. Bottom margin is missing publication line. Skilfully mended tear in bottom right corner. Some traces of minor surface soiling in margins. Image size: 12 5/8 x 19 2/8 inches. This exquisite view of the south prospect of York was drawn by the celebrated Yorkshire painter Henry Cave, and engraved by the acclaimed aquatinter Robert Havell. Cave was an accomplished painter and engraver who worked extensively on Yorkshire subjects. He studied under his father William Cave, an engraver of some repute, and made a name for himself as an accomplished topographical painter. He was admitted as a Freeman of York in 1801, and described on the roll as an engraver. He exhibited at the Royal Academy and the British Institution between 1814 and 1825, and was hailed as one of Yorkshire's premier talents. In 1813 Ackermann published "The Antiquities of York," which was richly illustrated with plates drawn and etched by Cave. This pleasant view follows the 17th century Dutch tradition of giving somewhat greater space to the sky than to the earth, thus providing a sense of potential and freedom. Born into a family of talented artists, the painter, engraver, and publisher Robert Havell worked in his family's London-based engraving firm for several years with his father, the topographical and architectural engraver and publisher, Daniel Havell, and his cousin, the painter William Havell. With his son he later established a successful business on Oxford Street that produced a number of illustrations for various travel and topographical publications as well as several series of topographical and architectural aquatint engravings including Picturesque Views on the River Thames (1812) and Views of the Public Buildings and Bridges in London and its Environs (1820-1). The father-son partnership lasted until 1828, at which time Robert Jr. immigrated to America. Le Blanc, Manuel de L'Amateur D'Estampes I, p. 616; Benezit, Dictionnaire des Peintres, Sculpteurs, Dessinateurs et Graveurs, vol. 3, p. 384. (Inventory #: 13537)
$1200.00 add to cart or Buy Direct from
Donald A. Heald Rare Books
Share this item
Donald A. Heald Rare Books
Offered by