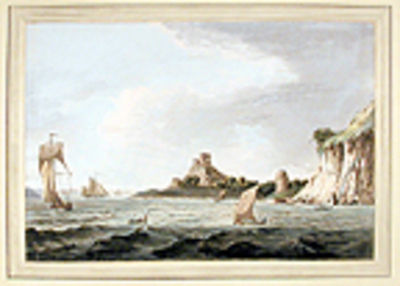 by WELLS, J after A. GRANT
London: Published by J. Grives, 103 Strand, 1789. Colour-printed aquatint with additional hand-colouring. Lovely contemporary colour. As usual text line is attached on verso of sheet. In excellent condition. Trimmed as usual and mounted on washline background. Mounting sheet is watermarked laid paper. Image size: 11 3/4 x 17 1/8 inches. A wonderful view of Dunoly Castle, Scotland. in the grand tradition of the picturesque English landscape. Dunollie Castle is north of Oban on the western coast of Scotland. It is a castle, now ruin, that was built in the 14th century. Towards the middle of the eighteenth century a trend developed amongst English artists and printmakers, which sought to visually record the natural beauties of England and Wales. Sparked by a sense of national confidence and patriotism, English printmakers began to publish topographical prints of the important sights in the British Isles. In addition to being a visual record of the countryside, they were meant to encourage public recognition of the beauty and history of England. They were aimed at English and foreign tourists who desired a memento of their travels, or at those vicarious tourists who collected topographical prints instead of traveling. At the same time the concept of the picturesque landscape developed amongst artists and printmakers across England and Europe. As an aesthetic theory the picturesque presents an idealized and sentimentalized view of nature. Using this concept, artists strove to depict nature as an aesthetic form, which was designed to evoke awe and amazement in the viewer. This practice developed a visual language for landscape painting that dominated the genre until the onset of the twentieth century. The effects of the picturesque on landscape painting, in a large measure, forms the way we see the countryside today, and the manner in which we perceive and interpret "beauty". According to "the picturesque" nature is wild and abandoned yet it conforms to a symmetrical structure that defines a sense of beauty and visual harmony. This is a wonderful example of a picturesque eighteenth century landscape print. By trimming the image within the platemark and mounting it on a decorative washline background the print has the effect of a landscape painting. The likeness is heightened by the addition of added body colour in the image and the use of a heavy painterly technique of engraving. This practice was common amongst engravers and printsellers who wished to capitalize on this trend for picturesque landscapes of the English countryside. This print is from the famed Oettingen-Wallerstein collection, which was compiled over two centuries by various members of the royal household. The collection is known for its stunning impressions and the immaculate condition of its prints. Clayton, The English Print 1688-1802 p. 155; Lugt, Les Marques de Collections, (Supplement) 2715a. (Inventory #: 10350)
$750.00 add to cart or Buy Direct from
Donald A. Heald Rare Books
Share this item
Donald A. Heald Rare Books
Offered by