View from the Upper Terrace Walk, in the Gardens at Shrublands 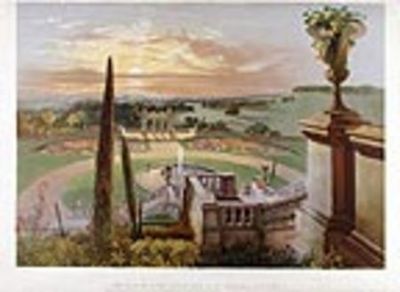 by BROOKE, After Edward Adveno (1821-1910)
London: Published by T. McLean, 1857. Colour-printed lithograph. Very good condition, with the exception of being trimmed a bit close to the image at the top and bottom, cutting into the text slightly at bottom. A stunning view of the gardens at Westfield Halll on the Isle of Wight, from the "The Gardens of England." The Italian-style garden at Shrublands was designed by the Victorian architect Sir Charles Barry with later modifications by William Robinson. It is a prime example of the Italian style of garden design that was popular in England during the early nineteenth century, and which was characterized by the use of decorative edifices, classical architectural elements, and stairways. Published in 1857, The Gardens of England is a series of 24 plates with accompanying text depicting the diverse luxuriant gardens of various distinguished English mansions. The mid-nineteenth century was a period during which the traditional aesthetics of garden design underwent a significant change in England, as innovative ideas and concepts were being continually introduced and explored. Brooke's publication embodies the eclectic nature of Victorian garden design and constitutes an important visual survey of the varied styles that were popular among the wealthy and fashionable. Little is known about E. Adveno Brooke, other than that he exhibited at the Royal Academy and British Institution between 1853 and 1864 and his most significant publication was The Gardens of England. Cf. Abbey, Scenery of Great Britain and Ireland, 392; cf. Benezit, Dictionnaire Des Peintres, Sculpteurs, Dessinateurs et Graveurs, Vol. 2, p. 842. (Inventory #: 14690)
$1200.00 add to cart or Buy Direct from
Donald A. Heald Rare Books
Share this item
Donald A. Heald Rare Books
Offered by