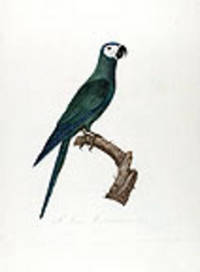 by BARRABAND, Jacques (1767/8-1809)
Paris, 1801. Colour-printed stipple engraving, finished by hand, engraved by Bouquet, printed by Langlois. This print is from an apparently unrecorded issue of Levaillant's Perroquets published on large format paper (probably 'papier vélin colombier satiné'), with a scratch proof of the title and plate number, but otherwise avant-lettre. This issue is not recorded in any of the standard bibliographies. Jacques Barraband was the finest ornithological artist of his time. The son of a weaver at the Aubusson Factory, he is first mentioned as a pupil of Joseph Malaine (1745-1809), the eminent flower painter, and is known to have worked for both the Gobelin Factory and the porcelain factory of Sèvres. His most important work was undoubtedly the 300 or so drawings that he produced for François Levaillant's three great ornithological monographs, the greatest of which was the Histoire Naturelle des Perroquets (1801-1805). (Inventory #: 14826)
$2000.00 add to cart or Buy Direct from
Donald A. Heald Rare Books
Share this item
Donald A. Heald Rare Books
Offered by