Elevation and Floorplans of the British Coffee House 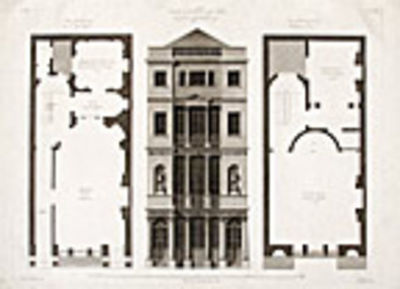 by ADAM, After Robert (1728-1792) and James ADAM (d.1794)
London, 1776. Copper engraving. Engraved by Robert Blyth. In excellent condition. An elegant engraving of the British Coffee House in London, from Robert Adam's seminal work on English architecture. Robert and his brother James Adam forever changed the face of British architecture by introducing innovative Classical design ideas. From 1754-57, Robert lived in Italy where he had a long productive friendship with Piranesi, which was inspirational for both men. Adam's first book, on Diocletian's palace in Dalmatia, is clearly very like the archaeological investigations Piranesi was making at the same time of similar ruins. Piranesi's friendship and passion for Roman Classicism were seminal influences on Adam, and the greatest single factor, other than his own talent, in the work Adam produced on his return to England. Upon his return, the brothers launched their career by building the Adelphi from the Thames to the Strand in London, which although not a commercial success at the time, included one of London's most cherished buildings, the Adlephi Theatre. Together, the Adam brothers designed and built some of the most famous buildings in England, including such bastions of English architecture as Kenwood House, Keddlestone Manor, and Syon House. To the interiors of their English country houses, the Adams brought wonderful ornamental elements in niches, lunettes, festoons and reliefs. Their classically designed buildings were so numerous in London that they changed the prevailing feel of the city and established their brand of neo-Classicism as the model of elegance and importance. It is asserted that the brothers originated the concept of the uniform facade attached to the typical English row house, an architectural device that distinguishes London buildings. This monumental contribution is evidenced in the Adams' designs for Portland Place and Fitzroy Square, and these were used as architectural models for the whole city. The brothers brought their talents into other areas by designing furniture to complement their beautiful interiors and by creating and publishing a treatise of design entitled 'Works in Architecture'. The work was published in three volumes over an extended span of time, beginning in 1773, with the final volume being published posthumously in 1822. Cf. Brunet I.47; cf. Lowndes I, p.8; DNB; Wilton-Ely, The Mind and Art of Giovanni Battista Piranesi. (Inventory #: 17143)
$650.00 add to cart or Buy Direct from
Donald A. Heald Rare Books
Share this item
Donald A. Heald Rare Books
Offered by