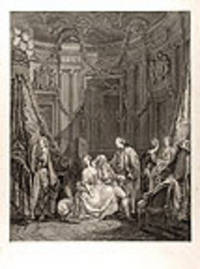 by TRIERE, Philippe after Jean Demosthene DUGOURE
1784. Engraving. Proof before letters. Printed on laid paper with watermark. In excellent condition with the exception of some very light foxing in the right margin. Image size: 15 x 11 7/8 inches. A fantastic proof before letters of this decorative Rococo print of a happy couple the morning after their wedding. Genre painting came back into favor when the Academy admitted Watteau's "The Pilgrimage to Cythera" to its ranks in 1717. From that point on a fashion for decorative subjects swept the country influencing an entire generation of French artists. This craze for intimate boudoir scenes did not subside until after the onset of the Revolution when, the frivolous tastes of the aristocratic elite were dispelled and a more sober era descended upon French art. This print is a wonderful example of French Rococo tastes. The picture is set in a sumptuous bedroom the morning after a young, aristocratic couple's wedding. The young bride sits on her father's lap while he speaks with his new son-in-law. Two chambermaids ready her toiletries while another closes the curtains on the marriage bed. This beautiful print is the pendant picture to Pierre Antoine Baudouin's "Le Coucher de la Mariee" which depicts the young newlyweds retiring to bed on their wedding night. Baudouin's painting was engraved by Moreau le jeune and finished by F. P. Simonet. Dugoure's frivolous scene is beautifully engraved by Triere creating a truly captivating image, which epitomizes the grand era of French Rococo art. Nevill, French Prints of the Eighteenth Century p. 135. (Inventory #: 10251)
$750.00 add to cart or Buy Direct from
Donald A. Heald Rare Books
Share this item
Donald A. Heald Rare Books
Offered by