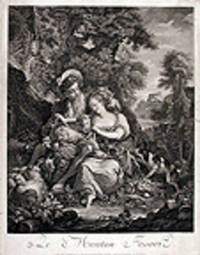 by GAILLARD, Robert (1722-1785) after Charles EISEN (1720-1778)
Paris: chez l'Auteur, rue S. Jacques, au dessus des Jacobins, 1755. Engraving. Printed on laid paper with watermark. In excellent condition with the exception of being trimmed on the bottom margin below the publication line. Small tear on right margin. Trimmed just outside platemark on top edge. Image size: 17 3/16 x 14 1/16 inches. A charming Rococo print by the Parisian engraver Robert Gaillard, after the celebrated genre painter Charles Eisen. Charles Eisen (1720-1778) was renowned for his charming genre paintings, which were immensely popular with an art market eager for romantic images. Eisen's charm and grace, as well as his considerable talent, brought him to the attention of the King's mistress, Madame du Pompadour. Through her influence Eisen soon became a popular Court painter and a professor at the Acadèmie de Saint-Luc. Eisen was granted the honor of instructing Madame Pompadour in drawing, a privilege, which insured court favours as well as aristocratic patronage. Like Boucher, Eisen rejuvenated the 'pastoral tradition' in French art. His idealic images are wonderful examples of the decorative paintings and prints that would have adorned the walls of aristocratic homes across France. Here, Eisen depicts a young couple seated in a woodland setting, clearly enthralled with one another The man, who is obviously a shepherd, places a rose into his lover's hair while she threads a ribbon around the neck of the favored lamb. A goat wither her kids resting on her on one side, a devoted dog on the other, add to the general atmosphere of affection. All of nature seems to yearn for the happiness and union of the young couple, and so, like many Rococo pastoral scenes, it is symbolic rather than literal, an emblem of the transformative power of love. The common view that scenes like these are saccharine and sentimental completely misses the point. Le Blanc, Manuel de L'Amateur D'Estampes, p. 261, No. 47. (Inventory #: 10061)
$650.00 add to cart or Buy Direct from
Donald A. Heald Rare Books
Share this item
Donald A. Heald Rare Books
Offered by