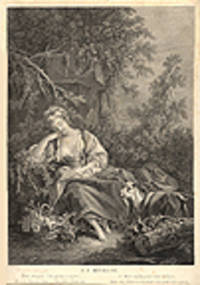 by BOUCHER, after François (1703-1770) [Engraved by Jacques Frimin Beauvarlet (1731-97)
Paris, 1780. Engraving. Printed on laid paper with watermark. In good condition with the exception of being trimmed within the platemark. Some overall light foxing and some sunning where a mat was in place. Image size: 15 1/2 x 11 1/4 inches. A lovely pastoral print after the celebrated French Rococo artist François Boucher. In this handsomely composed image, Boucher depicts a pretty shepherdess who has fallen asleep, attended only by a pet goat. She seems to epitomise "sweet dreams" with her calm face, bare feet, and the flowers in her hair, at her breast and at her feet. She is the ideal that pastoral art aimed at: unsophisticated attunement with nature and we feel in her innocence, beauty and vulnerability a latent fecundity both deeply restful and rich in possibility. François Boucher (1703-1770) was one of the most versatile and influential French artists of the eighteenth century. He not only decorated palaces and private residences, but also painted portraits, landscapes, and mythological scenes; and designed opera sets, porcelains, and tapestries. He was a prolific painter and draftsman and he excelled in cabinet-sized paintings for collectors, many of which were reproduced in print in an effort to satisfy the demands of eager connoisseurs. He began his career producing reproductive engravings of Watteau's paintings, but he quickly became one of the most fashionable artists in Paris. He was favoured by the King's mistress, Madame du Pompadour, and quickly became "premier peintre" to Louis XV. Boucher depicts a pretty shepherdess who has fallen asleep. She seems to epitomise "sweet dreams". Her innocence, beauty and vulnerability seem to symbolize restful sleep and in a larger way peacefulness itself. (Inventory #: 10046)
$700.00 add to cart or Buy Direct from
Donald A. Heald Rare Books
Share this item
Donald A. Heald Rare Books
Offered by