The Friar Rock in the Friars Valley 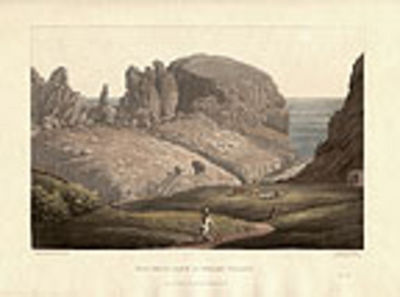 by BELLASIS, George Hutchins
London: G. H. Bellasis, 1815. Hand-coloured aquatint engraved by Robert Havell after drawings by Bellasis. Very good condition apart from some overall light soiling, a 3/4" tear in the left margin, and a 2 1/4" tear in the top margin that slightly extends into the image. A few small losses in the corners of the sheet, where tape on verso is slightly visible. Trimmed to platemark on bottom. A fine view of Friar's Valley in St. Helena taken from the east, which pictures a glimpse of the Atlantic ocean and the natural rock formation resembling a Friar in his habit from which the valley derives its name. Originally founded by the Portuguese in 1502, St. Helena is situated in the South Atlantic Ocean 1,695 miles north west of Capetown and 4,477 miles from Southampton. After a brief occupation by the Dutch in 1672, it was colonized by the British East India Company, in whose control it remained for over two hundred years. The island reached the zenith of its fame with the arrival of an exiled Napoleon in October 1815. He lived at Longwood, an estate just outside Jamestown, until his death in May 1821. At the time that Bellasis sketched the present view, St. Helena was considered a vital link in the chain of safe harbours needed for refitting ships on the busy trade route to India. In addition to its strategic geographic location, it was valued for its copious vegetation, abundant fruit trees, and the natural beauty of its mountainous and varied terrain. "Clear and wholesome springs issue from the sides of almost every hill, and the valleys abound with yams, potatoes, and water-cresses, which are grateful to mariners; and here it is worthy of remark, that four crops may be produced in the year, the climate being a perpetual spring..." (Bellasis, Intro. to Views of St. Helena). Bellasis resided on St. Helena for eight months, during which time he sketched its diverse landscapes and inhabitants. Views of St. Helena was published on the eve of Napoleon's arrival, and it was Bellasis' hope that his illustrations would "at the present period..be the more interesting, when this singularly romantic Island is the appointed residence of one of the most extraordinary men recorded in the annals of History." (Inventory #: 12810)
$400.00 add to cart or Buy Direct from
Donald A. Heald Rare Books
Share this item
Donald A. Heald Rare Books
Offered by