The Orchardist's Companion a quarterly journal, devoted to the history, character, properties, modes of cultivation, and all other matters appertaining to the fruits of the United States, embellished with richly colored designs of the natural size, painted from the actual fruits when in their finest condition 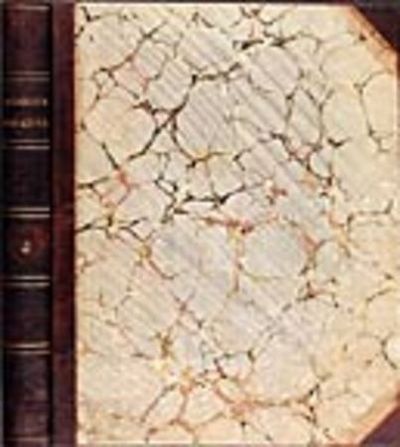 2 volumes in one, quarto

by HOFFY, Alfred (editor, fl. 1837-1864)
Philadelphia: A. Hoffy, 1841. 2 volumes in one, quarto. (11 5/16 x 8 5/8 inches). Title with wood-engraved vignette. 47 (of 48) hand-coloured lithographs. (Lacking plate 35 the 'Red Cheek Melacotan', title to 'vol.I' and pp.xi-xii from the 'Introduction'). Contemporary purple/red half roan, over marbled paper-covered boards, the flat spine divided into six compartments by double gilt fillets, lettered in the second compartment, numbered in the fourth Provenance: George W.B. Felten (early book label) 'The first American journal completely devoted to fruit' ("Oak Spring Pomona") and one of the rarest of American works illustrated with hand-coloured lithographs. Alfred Hoffy was a skilled lithographer who worked for several firms in Philadelphia, but fruit and fruit trees were his major enthusiasm. His Orchardist's Companion was the first published result of that passion. It is notable for a superb series of colour plates devoted to various fruits, the first such published in the United States (and not to be confused with Robert Hovey's Fruits of America, published in Boston from 1846 to 1852). "The book was dedicated to the President and Members of the Pennsylvania Horticultural Society...One of these members was a local nurseryman, Robert Buist (1805-80), who had been trained in the Royal Botanic Garden, Edinburgh, before coming to Philadelphia in the 1820s. There his garden became a centre for the introduction of new plants and seeds, and he wrote several books as well. In a 'Notice' dated March 1842 'A. Hoffy is doing himself the honor of announcing to his friends, subscribers, patrons and the public, that Mr. Robert Buist has kindly accepted at his hands the future Editorial department of The Orchardist's Companion, at the same time cannot omit expressing his feelings of satisfaction and pride in the opportunity of presenting to them so valuable an acquisition to the views of this work......The fruit illustrated in the ... plates was usually supplied from gardens near Philadelphia. The total number is made up of fourteen pears, eleven apples, eight peaches, seven plums, three grapes, two cherries, two strawberries, and a single apricot ... [The present copy is shy one peach]. All 48 [plates] were printed by P.S. Duval's Lithographic Press in Philadelphia and coloured by hand, probably by Hoffy's pupils. Hoffy himself drew and engraved [sic.] all the first 12; thereafter two of his students, D.S. Quinton and Edward Quayle, helped him...The titlepage vignettes were drawn by Hoffy and engraved by J.H. Brightly" (Oak Spring Pomona). Copies of Hoffy's work vary in collation. It was issued in parts, but Hoffy recommended that subscribers eventually bind the parts into two separate volumes: one of preliminary text, and a second containing the plates and their 'descriptive pages'. Wainwright notes that Hoffy issued parts of the Orchardist's Companion on a quarterly schedule beginning in 1841, with each part containing twelve illustrations of fruit. The final installment of the work, which raised the total to sixty plates and which is dated 1842-43, is not usually found and is lacking here. In the present copy all the text and the plates are in a single volume. The title ('Vol.I April. 1841') intended for the front of volume containing just text has been abandoned and the title which Hoffy meant to be bound in at the start of the plates ('Vol. 2 April. 1841') is bound in at the front of the text. Despite Hoffy's attempts at similar efforts, enthusiasm for his pomological productions waned. "Patronized by an impressive list of subscribers headed by the President of the United States, endorsed by the Pennsylvania Horticultural Society, and the recipient of a silver medal awarded by the American Institute of New York, The Orchardist's Companion nevertheless withered on the vine for lack of adequate support" (Wainwright). Cost was certainly a factor; though great plans were laid, no further additions to The Orchardist's Companion were forthcoming. Still, Hoffy was successful in creating an American fruit book of considerable beauty that became an early benchmark for the genre. Bennett, p.86; Oak Spring Pomona 59; Wainwright Philadelphia in the Romantic Age of Lithography, p.42. (Inventory #: 17751)
$9750.00 add to cart or Buy Direct from
Donald A. Heald Rare Books
Share this item
Donald A. Heald Rare Books
Offered by