View of the Great Exhibition 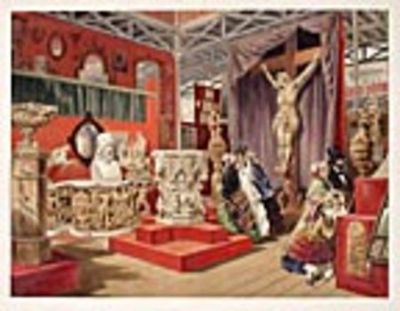 by DAY & SON
London: Published by Lloyd Brothers & Co. 22 Ludgate Hill, & Simpkin Marshall & Co. Stationers Hall Court, 1851. Hand coloured lithograph highlighted in gum arabic. Mounted on card as issued. In excellent condition with the exception of some discolouration in the margins. Image size: 11 1/4 x 14 7/8 inches. This wonderful image, illustrating various architectural ornaments, was included in Day & Son's rare folio of lithographs illustrating the wonders of the Great Exhibition. This is a lovely image from a rare suite of lithographs by Day & Son entitled Recollections of the Great Exhibition of 1851, published in London in the same year. This remarkable text is comprised of twenty-five hand coloured lithographs illustrating the various rooms and exhibits of the Great Exhibition. The works are lithographed by Day & Son after images by John Absolon, W. Goodall, C. T. Dolby, H. C. Pidgeon, Michael, and Wilson. This wonderful image depicts an ornate room filled with an array of architectural ornaments and religious statues. The Great Exhibition of 1851, although it was the first truly international event of its kind, was prompted by the success of the French Industrial Exposition of 1844. The idea was initially ignored by the British Government, but under the enthusiastic patronage of Prince Albert, plans for the exhibition went ahead. Albert was keen that the 'Exhibition of All Nations' should be self-financing: Parliament still remained unconvinced. A fund of 230,000 pounds was raised and a board of Commissioners set up. The declared aims of the exhibition were to celebrate human progress in the form of manufacture, invention and good design, and to promote cooperation between nations. The size of the exhibition space was fixed at 700,000 square feet, and the government was persuaded to treat the Crystal Palace as a bonded warehouse, so that no import duties were payable on goods imported for the exhibition. As it happened, and despite government skepticism, the event was a huge success, both nationally and internationally, and received over 6,000,000 visitors. The exhibition ranged in scope from ornamental furniture and modern machinery to an elaborate tent from Tunis. Abbey, Scenery of Great Britian and Ireland: In Aquatint and Lithography, 1770-1860, no. 246. (Inventory #: 17229)
$600.00 add to cart or Buy Direct from
Donald A. Heald Rare Books
Share this item
Donald A. Heald Rare Books
Offered by