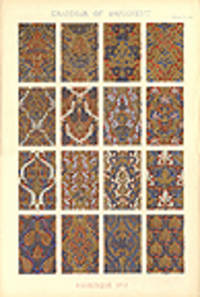 by JONES, Owen (1809-74)
London: Day & Son, 1856. Colour-printed lithograph. Very good condition. A fine image from Owen Jones's "The Grammar of Ornament," universally regarded as the classic reference work on Victorian aesthetics, and a visual synopsis of the major forms of decoration from around the world. It was Jones's wish to record for the future the artistic knowledge of the past in order to enrich the progress of Ornamental Art. Indeed, Jones's work was inspirational to William Morris and the Arts and Crafts movement in England and remains today an important source of decorative ornament. Not surprisingly, Jones "was among those who made the selection of objects from the Great Exhibition of 1851, which formed the foundation of the Victoria and Albert Museum's collections" (Susan Lambert ed., Pattern and Design: Designs for the Decorative Arts, 1480-1980). Cf. Ray England 228. (Inventory #: 10069)
$240.00 add to cart or Buy Direct from
Donald A. Heald Rare Books
Share this item
Donald A. Heald Rare Books
Offered by