As a Colt in Training 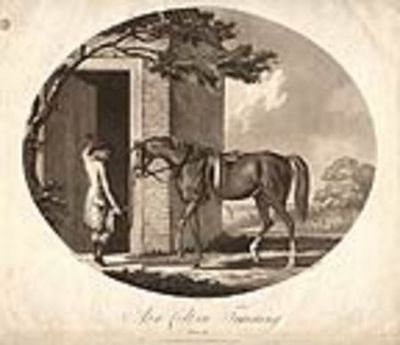 by JUKES, Francis (1745-1812) after Charles ANSELL (b. 1752)
London: Published by John Walker Carver & Printseller, 1784. Aquatint. Very good condition apart from some overall light soiling, minor foxing, and a small dark brown spot in the top left margin. A charming plate depicting a foal at the beginning of its racing career, from a suite of six prints after Ansell entitled "Life of a Race Horse." The animal and genre painter and draughtsman Charles Ansell was renowned for his graceful images of horses. This beautiful plate comes from his most celebrated work, Life of a Racehorse, which was published in 1784. Francis Jukes was a prolific engraver who was chiefly known for his topographical prints, the bulk of which he executed in aquatint. He contributed numerous plates to various publications including Walmsley's Views in North Wales (1792-4) and Campbell's A Journey in Scotland (1802) and collaborated on several projects with the engraver and publisher Robert Pollard. Cf. Dictionary of National Biography; cf. Le Blanc, Manuel de l'Amateur Destampes, p. 438, no. 1-6; cf. Benezit, Dictionnaire des Peintres, Sculpteurs, Dessinateurs et Graveurs, vol. 1, p. 353; cf. Siltzer, The Story of British Sporting Prints, p. 76. (Inventory #: 13879)
$475.00 add to cart or Buy Direct from
Donald A. Heald Rare Books
Share this item
Donald A. Heald Rare Books
Offered by