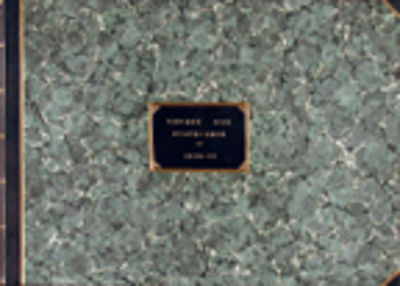 by [Water-colour Album]
1877. Oblong folio. (13 1/4 x 18 1/2 inches). 19 original watercolours (11 3/8 x 7 7/8 inches and smaller), mounted recto and verso of 7 thin card leaves (one page mounted with 4 drawings, one with 3 and one with 2, the others with 1 drawing per page, the final page blank), all painted by a single hand, and all with the location identified in ink in the lower margin of each drawing or on the mount just below. Modern blue half morocco gilt, blue morocco title label centrally-placed on upper cover 'Voyage aux / Etats-Unis / 1876-77' A fine series of original watercolour views of Lake George, N.Y., and elsewhere - including one watercolour of Central Park, New York. From the heading ('Voyage aux Etats-Unis / 1876-1877') on the first page of this album, as well as from the wording of the captions to the drawings, it is clear that these highly accomplished watercolours are the work of a French-speaking visitor to North America in 1876-1877. They include 14 views of Lake George and its vicinity (including one of Caldwell [now Lake George Village] and one of Tea Island). Also included is a single view of a rocky outcrop and trees in Central Park, another of Glenn Falls on the Hudson, and a third of the Montmorency Falls just outside Quebec, as well as two fine but rather unexpected Swiss views of Amphion, Lake Geneva (both dated 1877). (Inventory #: 12398)
$7500.00 add to cart or Buy Direct from
Donald A. Heald Rare Books
Share this item
Donald A. Heald Rare Books
Offered by