Detail of a fresco in the 'Domus Aureus' 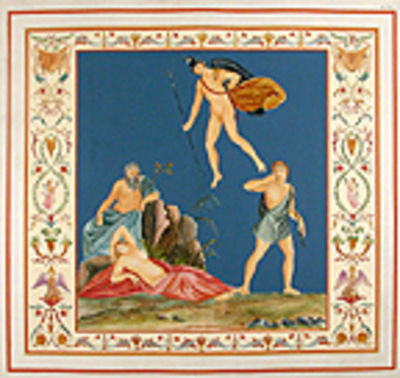 by CARLONI, Marco (1742-1796) after Franciszek SMUGLIEWICZ (1745-1807) and Vincenzo BRENNA (1745-1820)
Rome: Ludovico Mirri, 1778. Original engraving with modern bodycolour. Very good condition apart from somel light soiling and mild rippling. A fine plate from 'Vestigia delle terme di Tito e loro interne pitture' of an ancient fresco from the 'Domus Aureus', Nero's sumptuous imperial complex in Rome. Situated between the Palatine and Esquiline Hills in Rome and designed by architects Severus and Celer, the Domus Aureus (Golden House) was erected by Nero in 64 AD after the great fire in Rome. The magnitude and decadent extravagance of the impressive gold-covered, jewel bedecked palace was intended to glorify the Emperor's reign. Its rooms were filled with lavish furniture and its walls and ceilings covered with decorative late-Hellenistic murals by the renowned ancient artist Fabullus. Nero, however, died in 68 AD before the Domus was totally completed. Years later, Titus (and later Trajan) built his thermal bath over its ruins, which were used as a foundation for and were partially preserved by Titus' edifice. Successive emperors continued to erect various buildings on the site and subsequently make several renovations to the Domus substructure. In 1480, practically forgotten, the Domus was excavated, and its subterranean passages and rooms thereafter became known as 'le grotte' (cave). Many of its original frescoes survived, and their motifs and ancient style of ornamentation, called 'grotteschi' (grotesque) after 'grotte', became extremely popular during the Renaissance, influencing many prominent artists such as Raphael, Michelangelo, Ghirlandio, and Pinturicchio. Published in the late eighteenth century, 'Vestigia delle terme di Tito e loro interne pitture' is an elaborate album of engravings depicting the stunning 'al fresco' and 'al stucco' murals of Nero's Domus Aureus. Carloni's colourful and beautifully rendered plates faithfully capture the grotesque style of the ancient frescoes, which was characterized by decorative borders filled with whimsical, often comical animals and foliage taken from both nature and the artist's imagination. The ornamental borders also served the practical functions of framing the central mythological, religious, or historical subject portrayed and separating the various murals in a single decorative scheme. (Inventory #: 10428)
$1200.00 add to cart or Buy Direct from
Donald A. Heald Rare Books
Share this item
Donald A. Heald Rare Books
Offered by