The Great Court of Greenwich Hospital 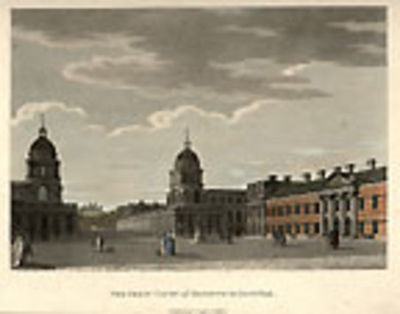 by MALTON, Thomas (1748-1804)
London: Published by T. Malton, 1799. Hand-coloured aquatint. Mounted on cardboard. Good condition apart from some light foxing in the margins and the image. A rare early aquatint view of the Royal Hospital for Seamen in Greenwich, southeast London, from Malton's ambitious series of aquatints and engravings "A Picturesque Tour Through London," issued between 1792-1801. Designed by Sir Christopher Wren, the palatial hospital complex was constructed between 1696 and 1751. It later became the Royal Naval College in 1873. The son of the architectural draughtsman Thomas Malton, Thomas Malton the younger was an early exponent of the art of aquatint, which he used to make multiple copies of the topographical views for which he was famous. He was chiefly known for his stunning views of London, which were prized for their architectural accuracy and regarded as valuable topographical records. Like his brother James, Malton worked as a draughtsman in the office of the celebrated Irish architect James Gandon in London. He regularly exhibited at the Royal Academy, beginning in 1773, and was awarded a prestigious pecuniary prize by the Society of Arts in 1774. From 1783 to 1789, he taught an evening drawing class from his home in London's Conduit Street, where he instructed a young Thomas Girtin and J. M. W. Turner, the latter of whom he greatly influenced. Cf. Adams, London Illustrated 72.H; cf. Abbey, Scenery of Great Britain and Ireland 204; cf. Dictionary of National Biography. (Inventory #: 13413)
$300.00 add to cart or Buy Direct from
Donald A. Heald Rare Books
Share this item
Donald A. Heald Rare Books
Offered by