View Near Fort Montgomery. No. 18 of the Hudson River Port Folio 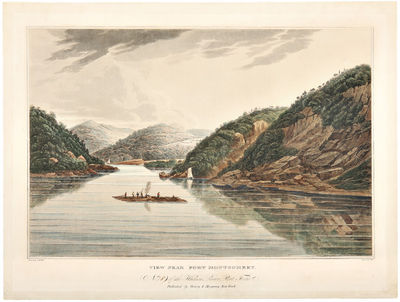 by HILL, John (1770-1850, engraver) & William Guy Wall (1792-1864)
New York: Henry J. Megarey, 1822. Aquatint, colored by hand, by John Hill, after W.G. Wall. The plate number "18" has been written in ink in the title. A few minor abrasions in the title and mild soiling. Superb example of one of the greatest and earliest works devoted to the American landscape Wall and Hill demonstrate in this view their great talent for investing apparently simple and random scenes with grandeur and intrigue. The focal point of the image is an unadorned raft with a number of men shown from so far away that there no distinguishing individual characteristics: they are mere figures floating down the calm, mirror-like river. The hills that slope down into the river are reflected to such a degree that it's hard to discern exactly where the hills stops and the reflection begins. The succession of hills and the river recede into the distance beneath a gray sky, also reflected in the river. The hills, river and sky seem to have a quiet liveliness of quite a different order than that of the active little figures on the raft. "The Hudson River Portfolio, a series of twenty views...celebrates the beauty of the Hudson and its surroundings. It is amongst the finest collections of New York State views ever published...The aquatints show us the region of the Hudson's headwaters, the rapids it creates on its journey downstream, the bridges it makes imperative overhead, the trade that its navigability spawns, and, most of all, the ennobling topographic settings through which it passes. In the final view, New York from Governor's Island, we see the Hudson at the end of its journey, where it joins the East River in New York Bay...William Guy Wall...was a native of Dublin who came to America in 1818...Beginning in 1826, he exhibited frequently at the National Academy of Design...[He was skillful with atmospheric perspective in his landsacpes, and he created almost spiritual effects with light, at a time when viewers were used to literal depictions. Between 1828 and 1835 he remained in America, but then returned to Dublin for twenty years. He came back to America for four years between 1856 and 1860, before again returning in Ireland where he lived for the remaining four years of his life] Wall frequently worked in tandem with John Hill, whose emigration from England predated that of Wall by two years...According to Koke, 'the artistic achievement for which Hill is best known...was the Hudson River Portfolio, a landscape series closely akin to the Picturesque Views of American Scenery recently finished for the Careys' (John Hill Master of Aquatint, p.86)...Hill, an aquatintist virtually without peer in America, was called in to fill the place vacated by John Rubens Smith, who dissociated himself from the Portfolio before he finished engraving the four plates of the first number...Hill belonged to a small group of English-trained engravers who raised the level of American print-making to an extraordinary degree" (Deak, pp. 217-218). Second state of 3 (with number `18' added in manuscript to title) Koke, A Checklist #82; Deak, Picturing America #320. (Inventory #: 17018)
$6000.00 add to cart or Buy Direct from
Donald A. Heald Rare Books
Share this item
Donald A. Heald Rare Books
Offered by