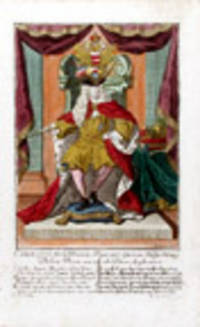 by ENGELBRECHT, Martin (1684-1756) after Charles Streuttner
Augsburg: Published by Martin Engelbrecht, 1745. Engraving with thick early colour with gold highlights. Printed on laid paper. In excellent condition with the exception of some minor foxing in the margins. A lovely portrait, with stunning early colour, of Holy Roman Emperor Charles VI, by the celebrated Augsburg engraver Martin Engelbrecht after a painting by Charles Steuttner. Charles VI, last emperor of the direct Hapsburg line, reigned as Emperor from 1711 to 1740. His claim to rulership of Spain, mentioned in the title, was one factor precipitating the War of the Spanish Succession. He was the father of Maria Theresa, and was a noted patron of the arts. Martin Engelbrecht was one of the most prolific engravers and printsellers in Augsburg at the close of the 17th century. Along with his brother Christian, Martin dominated the print trade, producing some of the finest prints of his day. His outstanding portraits and landscape studies are beyond compare and his religious and allegorical engravings display a technical aptitude superior to many of his contemporaries. Martin had great success with his optical prints, which were used in perspective boxes. He is best remembered for his equestrian portraits depicting European nobility, and his engravings of Queen Elizabeth and Joseph II are numbered amongst his best work. This stunning portrait of Charles is a rare example with vibrant early colour and is a wonderful example of Engelbrecht's superior work. (Inventory #: 15092)
$350.00 add to cart or Buy Direct from
Donald A. Heald Rare Books
Share this item
Donald A. Heald Rare Books
Offered by