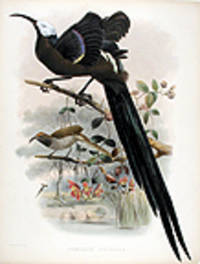 by WOLF, Joseph (1820-1899)
[London, 1873. Lithograph by J. Smit after Joseph Wolf, hand-coloured by J.D. White, heightened with gum arabic. (1 1/2 inch repaired tear to left margin). A magnificent image of the largest and most remarkable of the thin-billed Birds of Paradise, painted by Joseph Wolf, who was 'without exception, the best all-round animal artist who ever lived' (Sir Edwin Landseer). From Elliot's great work on the 'Birds of Paradise', which includes some of the most highly praised bird illustrations ever produced. Ornithological illustration reached its height during the golden age of lithography, and this image is from that great era. Even today, with all of the excellent methods of colour reproduction available, the beauty of hand-colouring cannot be equalled. Joseph Wolf is pre-eminent amongst the ornithological artists of the day: he was the first bird artist to fully understand and use the new freedom of style that lithography allowed. The lithographic crayon suited Wolf's drawing style, transforming his soft expressive lines and subtle suggestions of movement into a printable image. His work set a new standard in life-like representations and Wolf's skill at capturing the essential character of his subjects also breathed life into the stiff "bird on a perch" portrayals so characteristic of bird art of the day. The plates in Elliot's Monograph of the... Birds of Paradise, 'almost as magnificent as the birds they portray, were the fruits of Elliot's considerable wealth, Wolf's great artistry and both men's profound knowledge and love of birds' (Dance). Elliot writes in the preface `The drawings of Mr. Wolf will, I am sure, receive the admiration of those who see them; for, like all that artist's productions, they cannot be surpassed, if equalled, at the present time. Mr. J. Smit has lithographed the drawings with his usual conscientious fidelity, and in his share of the work has left me nothing to desire... In the coloring of the plates Mr. J.D. White has faithfully followed the originals; and in the difficult portions where it was necessary to produce the metallic hues, he has been very successful'. Cf. Anker 131; cf. Dance, The Art of Natural History, 1978, p.132; cf. Fine Bird Books (1990) p. 95; cf. Nissen IVB 296; cf. Wood p. 331; cf. Zimmer p. 207. (Inventory #: 11110)
$4500.00 add to cart or Buy Direct from
Donald A. Heald Rare Books
Share this item
Donald A. Heald Rare Books
Offered by