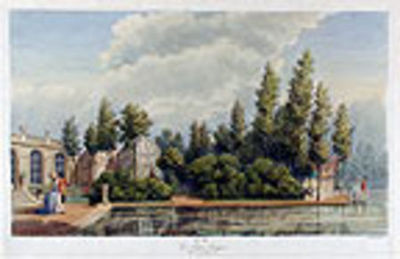 by MISHAUT after Louis Carrogis dit CARMONTELLE (1717-1806)
[Paris: Published by M. Delafosse, 1779. Hand-coloured engraving. Tipped onto larger sheet of fine laid paper. Very good condition. A beautifully coloured print picturing one of the picturesque garden follies in the Parc Monceau, from Carmontelle's "Jardin de Monceau," a collection of plates depicting the innovative features and design of this famous Parisian park. Designed by Carmontelle for the Duc de Chartres (the future Duc d'Orléans) and erected between 1773 and 1778, the Parc Monceau was one of the first landscaped parks to be constructed in Paris. It was designed in the Anglo-Chinese style, which originated in England and reached the height of its popularity in France during the late eighteenth century. This style was characterized by immaculately manicured foliage and lawns and particularly by the use of conventions such as fabriques or folies, small ornamental edifices replicating exotic structures like Graeco-Roman temples, Oriental pavilions, Turkish tents, and Egyptian pyramids, which were used to visually enhance the garden, elicit emotion, and evoke lyrical associations with foreign places and ancient cultures. Essentially self-taught, Louis de Carmontelle was an extremely versatile draughtsman, painter and engraver, whose rare engravings are highly prized today. His first entrée into fashionable French society was as a mathematics tutor to the children of the French nobility, and he later became a popular figure at the royal court, where he entertained courtiers and eminent visitors with his "proverbs" (witty observational verses), his novel "transparencies" (a precursor of the magic lantern in which panoramic views were projected through illuminated transparent paper), and the copious portraits he spontaneously executed upon request. In 1763, he was employed to tutor and entertain the son of the Duc d'Orléans, who several years later entrusted him with the design of the Parc Monceau, one of Carmontelle's greatest artistic achievements. Cf. Benezit, Dictionnaire Des Peintres, Sculpteurs, Dessinateurs et Graveurs, Vol. 3, p. 254-5. (Inventory #: 13651)
$600.00 add to cart or Buy Direct from
Donald A. Heald Rare Books
Share this item
Donald A. Heald Rare Books
Offered by