A Chart of the Harbour of Boston, Composed from different Surveys; but principally from that taken in 1769, by Mr. George Callendar, Late Master of His Majesty's Ship the Romney 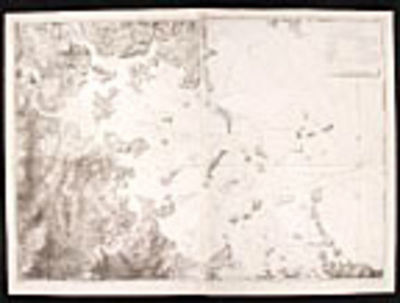 by DES BARRES, J. F. W. (1721-1824, publisher) - Samuel HOLLAND (1728-1801) and George CALLENDAR (fl. around 1769), surveyors
London: Published by J.F.W. Des Barres in 'The Atlantic Neptune', 1775. Copper-engraved and etched map, with aquatint, on two joined sheets. Printed on laid paper with `J Bates' watermark and `JB' countermark, in excellent condition. Sheet size: 30 1/4 x 42 5/8 inches. [With:] The explanatory text leaf, titled as above. 1p., folio (25 1/2 x 19 inches). The finest and most celebrated sea chart of Boston Harbor ever produced, and a highly important Revolutionary War map depicting details relating to the Siege of Boston: with the very rare explanatory text leaf. This is one the most important maps contained in Des Barres' The Atlantic Neptune, and one of the most significant large-scale maps of the Revolutionary War. It provides an invaluable record of Boston at the beginning of the war, covering the area from the environs of the city out into the open waters of Massachusetts Bay. A particularly striking feature is the use of boldly etched and subtly aquatinted details to capture the diverse topography of the region, including the numerous hills, islands, and river estuaries. It is important to remember that this was issued as a working sea-chart, and as such the cartographer has naturally concentrated on features such as depth soundings, indicated by detailed lines and based on surveys by Samuel Holland and George Callendar, and the navigable channels between the harbor's numerous shoals, which are delicately outlined in stipple-engraving. Holland's original manuscript map is today preserved in the British Hydrographic Library at Taunton, Somerset. The present map shows the city of Boston, with its streets carefully outlined, occupying a pear-shaped peninsula, a position that would soon prove precarious to its British defenders in the escalating conflict. This is the second state (of five) of Des Barres' chart, and is identical to the Henry Stevens Collection, variant 96D, in the National Maritime Museum, Greenwich. This state shows a number of notable changes when compared with the original, and was evidently altered to take particular account of the Siege of Boston (April 19, 1775 to March 17, 1776). Henry Stevens noted that this state depicted the addition of "Numerous Forts, Batteries, Redoubts, &c. [which] have been inserted in many places, notably on the Charles Town peninsula, and on the mainland between 'Willis Creek' and 'Mystic River,' also on the east and north side of 'Charles River' below 'Cambridge'...[also] to the south of 'Boston Neck' and 'Dorchester Neck'...[This state] is almost as rare as the first state. It is found in some copies of the earliest edition of the Neptune." The accuracy, scope and artistic virtue of Des Barres's Chart of the Harbour of Boston was apparent to his contemporaries and it became the main source map of the area for decades to come. Joseph Frederick Wallet Des Barres was born in Switzerland, where his Huguenot ancestors had fled following the repeal of the Edict of Nantes. He studied under the great mathematician Daniel Bernoulli at the University of Basel, before immigrating to Britain where he trained at the Royal Military College, Woolwich. Upon the outbreak of hostilities with France in 1756, he joined the British Royal American Regiment as a military engineer. He came to the attention of General James Wolfe, who appointed him to join his personal detail. During this period he also worked with the legendary future explorer James Cook on a monumental chart of the St. Lawrence River. Upon the conclusion of the Seven Years War, Britain's empire in North America was greatly expanded, and this required the creation of a master atlas featuring new and accurate sea charts for use by the Royal Navy. Des Barres was enlisted to survey the coastlines of Nova Scotia, Newfoundland, and the Gulf of St. Lawrence. With these extremely accurate surveys in hand, Des Barres returned to London in 1774, where the Royal Navy charged him with the Herculean task of producing the atlas. He was gradually forwarded the manuscripts of numerous advanced surveys conducted by British cartographers in the American Colonies, Jamaica and Cuba, of which the present map is based on the work of Samuel Holland, conducted in the 1760s. The result was The Atlantic Neptune, which became the most celebrated sea atlas of its era, containing the first systematic survey of the east coast of North America. Des Barres's synergy of great empirical accuracy with the peerless artistic virtue of his aquatint views, created a work that "has been described as the most splendid collection of charts, plates and views ever published" (National Maritime Museum Catalogue). The Neptune eventually consisted of four volumes and Des Barres's dedication to the project was so strong that often at his own expense he continually updated and added new charts and views to various editions up until 1784, producing over 250 charts and views, many appearing in several variations. All of these charts were immensely detailed, featuring both hydrographical and topographical information, such that in many cases they remained the most authoritative maps of the regions covered for several decades. Following the completion of The Neptune, Des Barres returned to Canada, where he remained for a further forty years, becoming a senior political figure and a wealthy land owner, living to the advanced age of 103. Cf. Guthorn,British Maps of the American Revolution, (referring to Holland's original manuscript) 59/3; Krieger & Cobb p.107 (1781 issue); Lingel, Atlantic Neptune N91.2; National Maritime Museum, Henry Stevens Collection K0713 HNS 96D; National Maritime Museum, Catalogue, 78-83; Nebenzahl Bibliography 3; Stevens, Bibliography of the Atlantic Neptune (unpublished) pp.211-216; Sellers & Van Ee, 945. (Inventory #: 17671)
$17500.00 add to cart or Buy Direct from
Donald A. Heald Rare Books
Share this item
Donald A. Heald Rare Books
Offered by