Sandy Hook to the Needles 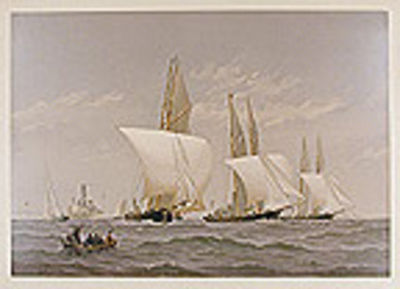 by COZZENS, Frederic S. (1846-1928)
New York: Charles Scribner's Sons, 1884. Colour-printed lithograph, mounted on card. Very good condition apart from a few small brown spots in the lower left and right sides of the image. Frederic Cozzens was one of America's greatest marine artists. Like nearly every other great marine artist, he was thoroughly acquainted with every aspect of ship construction and the art of sailing. He is best known for his paintings of great American yachts of the latter half of the 19th century, which were commissioned by many of New York's leading yachtsmen. In 1884, he expanded his audience by making a series of lithographs of his paintings. The first and most brilliant series was American Yachts, Their Clubs and Races from which this print comes. Sandy Hook to the Needles depicts an exhilarating moment at the beginning of the great race across the Atlantic Ocean to the Needles on the coast of England. It pictures three of the participating yachts, the Fleetwing, Henrietta, and Vesta, racing head to head after having recently embarked from the starting point at Sandy Hook, which is visible in the right distance, on a Tuesday, December 1866. Jacobsen, Frederic Cozzens. Marine Painter, New York: 1982. (Inventory #: 13880)
$1750.00 add to cart or Buy Direct from
Donald A. Heald Rare Books
Share this item
Donald A. Heald Rare Books
Offered by