Tiresias Was bred by His Grace the Duke of Portland in 1816 was got by Soothsayer out of Sledge... At Epsom he won the Derby Stakes beating 15 others among whom were Sultan, Euphrates, The Dominic, &c 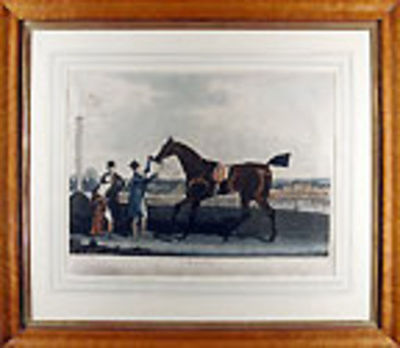 by POLLARD, James (1792-1867)
London: R. Pollard & Sons, 1819. Coloured aquatint. Framed in a lovely birds-eye maple frame with gold slip. Mounted in fine washline mount. In excellent condition with the exception of a minor scuff in the upper left corner of image. A fine portrait of the winner of the 1819 Epsom Derby, engraved by James Pollard from his own original drawing. Tiresias is shown just before a race: his groom administers a last minute tonic (!) while his jockey (W. Clift) takes off an overcoat in preparation to mount, and his trainer looks on proudly. In the background can be seen the grand-stand of the race course (possibly Epsom). James Pollard was the youngest son of the London engraver and print-seller Robert Pollard. He began work at the age of fifteen as a painter but quickly turned to engraving as well. In the 1820s his coaching scenes became both fashionable and lucrative. "A stream of coaching paintings followed, many of which he engraved himself. From 1821, he exhibited a small number of pictures at the Royal Academy and the British Institution, which brought him more patrons. Between 1830 and 1840, Pollard also painted a number of racing pictures and some of the earliest scenes of steeple chasing on purpose-made courses, many recording the prowess of the few professional and more amateur riders of the day...[In all his work Pollard took great pains over accuracy, this is particularly true of his large scale works and] it is Pollard's large racing scenes which really take off and into which one can gaze and discover a microcosm of the turf" (Charles Lane, British Racing Prints, p.146). Lane, British Racing Prints, p.146; cf. Selway, James Pollard 1792-1867, p.47 (variant title); Siltzer p. 214. (Inventory #: 13656)
$3250.00 add to cart or Buy Direct from
Donald A. Heald Rare Books
Share this item
Donald A. Heald Rare Books
Offered by