A View of the Streights in Dove Dale, near Ashborn in Derby Shire 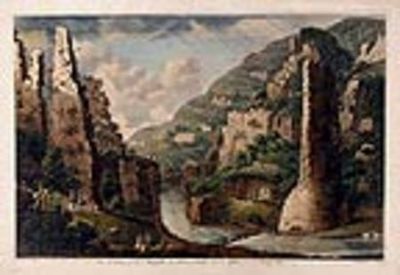 by BOYDELL, John (1719-1804)
London: Published by John Boydell at the Globe near Durham Yard in the Strand, 1750. Engraving with hand-colour. Printed on watermarked laid paper. In excellent condition with the exception of some slight paper discolouration in the margins. Image size: 11 1/2 x 17 7/16 inches. A striking view of the Streights in Dove Dale, Derbyshire, from Boydell's series of plates "Collection of One Hundred Views in England and Wales." Towards the middle of the eighteenth century, a trend developed among English artists and printmakers who sought to record visually the natural beauty of England and Wales. Sparked by a sense of national confidence and patriotism, English printmakers began to publish topographical prints of the important sights in the British Isles. In addition to being a visual record of the countryside, they were meant to encourage public recognition of the beauty and history of England. They were aimed at English and foreign tourists who desired a memento of their travels, or at those armchair travellers who collected topographical prints instead of traveling. John Boydell made a name for himself by joining this nationalistic trend and publishing a long series of topographical engravings. These fine engravings are some of the earliest examples of Boydell's work when he was known more as an engraver than a publisher and print seller. John Boydell is one of the most influential figures in the history of English printmaking. He was not only an accomplished engraver and an industrious publisher, but also a talented print seller who came to dominate the English print trade. He is best known as the originator of the Shakespeare Gallery, which made him one of the most successful print sellers of his time. Le Blanc, Manuel de L'Amateur D'Estampes, p. 504, no 87; Clayton, The English Print 1688-1802, pp. 115-116 & 155. (Inventory #: 13503)
$650.00 add to cart or Buy Direct from
Donald A. Heald Rare Books
Share this item
Donald A. Heald Rare Books
Offered by