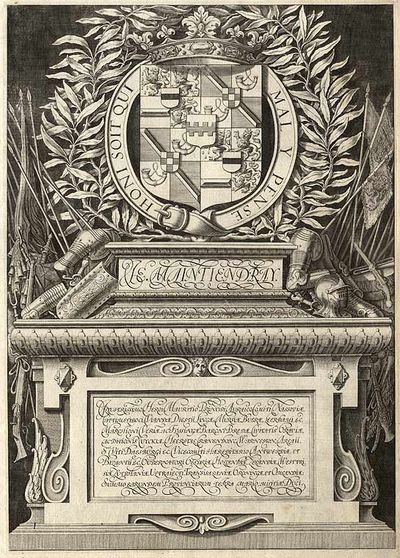 by THIBAULT, Girard - [?Simon Van de PASSE (1595-1647)]
[Leiden: B. & A. Elzevir, 1628. Copper engraving by ?Simon Van der Passe. Very good condition apart from a few small tears in the margins, a tinyhole in the lower left-hand corner of the image, and a few light foxing marks in the margins. A fine print from the most sumptuous book on fencing ever produced, which combines a strong design sense with beauty and historical importance, executed by one of the greatest engravers of the day. Thibault's work was produced during a period when the Italian rapier (or epee) held sway. "The Italians discovered the effectiveness of the dexterous use of the point rather than the edge of the sword. By the end of the 16th century, their lighter weapon...and simple, nimble, and controlled fencing style, emphasizing skill and speed rather than force, spread throughout Europe. Most of the wrestling tricks [used in earlier disciplines] were abandoned, the lunge was discovered, and fencing became established as an art" (Encyclopaedia Britannica). The present image marks the zenith of the use of the epee in Europe. "In the latter half of the 17th century, the sword and swordsmanship changed dramatically with a change in gentleman's dress. In France the court of Louis XIV set the fashion of silk stockings, breeches, and brocaded coats...As the long trailing rapier was unsuited to this form of dress, fashion decreed the wearing of a light, short court sword. The French style set in throughout Europe as the Italian had done earlier" (op. cit.). Cf. Vigeant p. 125; cf. Willems 302. (Inventory #: 10791)
$450.00 add to cart or Buy Direct from
Donald A. Heald Rare Books
Share this item
Donald A. Heald Rare Books
Offered by