A View near Scheveling painted by DeVlieger 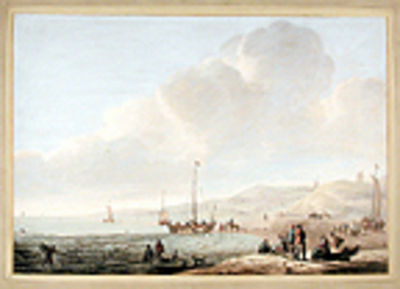 by IRELAND, Samuel
London: Published by Molteno & Co. No. 132, Pall Mall, 1788. Etching and aquatint with hand-colour. Lovely contemporary colour. As usual text line is attached on verso of sheet. In excellent condition. Trimmed as usual and mounted on washline background. Mounting sheet is watermarked laid paper. Image size: 14 7/16 x 20 5/8 inches. A charming seaside view by Samuel Ireland, the engraver and collector connected with the infamous Shakespeare forgeries. Ireland was a minor engraver and publisher who worked in London at the close of the eighteenth century. He was an avid art and manuscript collector, and many of the works that he engraved and published were after pieces found in his own collection. This romantic view is after a painting by DeVlieger, which was in Ireland's collection at the time. This image operates as both an example of the picturesque tradition in eighteenth century landscape prints, and as an advertisement and promotion of Ireland's celebrated collection. With this image Ireland presents himself as both a serious engraver and a respected collector. Unfortunately, today Ireland is better remembered for his involvement in the Shakespeare forgeries than for his evocative prints. Over a period of many years Ireland's son, William Henry, sold his father a series of forged manuscripts, which he claimed to be written in Shakespeare's hand. Ireland, who willingly trusted his son, added these forgeries to his collection and presented them in an exhibition to the literary community, who accepted them as genuine. The charade progressed so far that an invented play entitled 'Vortigern', which William Henry had written and presented as a missing work by Shakespeare, was performed at Sheridan's Drury Lane theatre by some of the leading actors of the age. When the hoax was eventually discovered Ireland's reputation was ruined, and his son was disgraced. This print is from the famed Oettingen-Wallerstein collection, which was compiled over two centuries by various members of the royal household. The collection is known for its stunning impressions and the immaculate condition of its prints. Dictionary of National Biography; Lugt, Les Marques de Collections, (Supplement) 2715a. (Inventory #: 10351)
$1500.00 add to cart or Buy Direct from
Donald A. Heald Rare Books
Share this item
Donald A. Heald Rare Books
Offered by