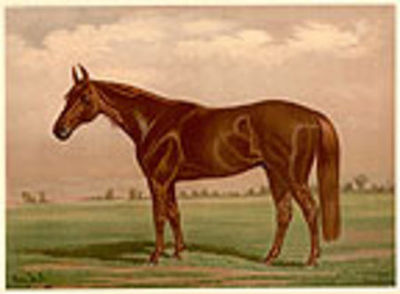 by STULL, After Henry (1851-1913)
Boston: Published by S. F. Cassino, 1881. Colour-printed lithograph mounted on card as issued. Engraved by Armstrong and Company after Stull. Very good condition. A charming image from "American Racing Horses," a collection of prints depicting some of the most eminent race horses in America during the late 19th century. A chestnut stallion foaled in 1871, Piedmont was bred by H. A. Ferguson of Lexington, Kentucky. He participated in a number of races including the 1875 Charter Oaks Stake and an 1881 free-for-all stallion race in Chicago. Primarily renowned for his distinctive images of racehorses, Henry Stull was one of the most prominent equestrian artists in late 19th- and early 20th-century America. As a youth, he migrated from his native Canada to the United States, where he settled in New Rochelle, New York. In addition to his paintings of horses and animals, many of which were issued as lithographs, Stull produced numerous illustrations for Leslie's Weekly Magazine. His works can be found in many important collections such as the New York Jockey Club, the National Museum of Racing Hall Fame, and the Kentucky Derby Museum. Cf. Benezit, Dictionnaire des Peintres, Sculpteurs, Dessinateurs, et Graveurs, vol. 13, p. 332. (Inventory #: 14095)
$350.00 add to cart or Buy Direct from
Donald A. Heald Rare Books
Share this item
Donald A. Heald Rare Books
Offered by