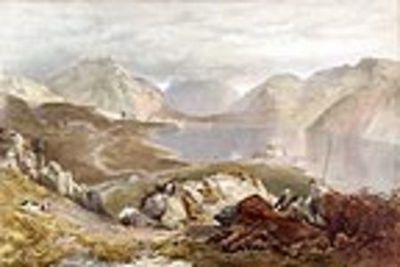 by PYNE, James Baker (1800-1870) lithographed by W. GAUCI
London: Published by Thos. Agnew & Son, 1853. Tinted lithograph with rich publisher's colour. Printed on wove paper. Trimmed to image as issued. In excellent condition with the exception of some very minor foxing in the image. A stunning view of Wast Water, from the deluxe portfolio edition of John Baker Pyne's magnificent work "The English Lake District." The Lake District first came to the fore with the rise of the Romantic Movement during the second half of the eighteenth century. The poet William Wordsworth, a native of the district, established the area as the epitome of the ideal landscape, and artists and tourists alike visited the regions natural beauties in search of the Romantic ideal. Poets such as Byron, Shelley, and Keats proclaimed the Lakes as the manifestation of the "Picturesque." By the middle of the nineteenth century, when Pyne visited the area, the Lakes were well established in the national consciousness as the most beautiful natural reserve in England. Bristol-born James Baker Pyne is now considered by many to have been second only to Turner in his ability to capture the essence of the English landscape. After training initially for the Law, he turned to painting in his twenties. He moved to London in 1835, where he exhibited at the Royal Academy and the Society of British Artists (where he later became Vice President). He traveled widely throughout Britain and Europe, but he is best known for his series of views of the Lakes, painted between 1848 and 1851. This exquisite view comes from the deluxe portfolio edition of Pyne's celebrated text "The English Lake District." First published in 1853, the deluxe edition was issued in custom-made portfolios with the images superbly coloured and tipped onto thick wove cards. Examples of these images are difficult to find, making this striking print a true rarity. Pyne's seminal work was later reissued by Day & Son in 1859 with the title "Lake Scenery of England." Abbey, Scenery of Great Britain and Ireland, in Aquatint and Lithography 1770-1860 p. 123, no. 196, plate 13; Tooley, English Plate Books with Coloured Plates 1790-1860 no. 387, plate 12. (Inventory #: 13490)
$750.00 add to cart or Buy Direct from
Donald A. Heald Rare Books
Share this item
Donald A. Heald Rare Books
Offered by