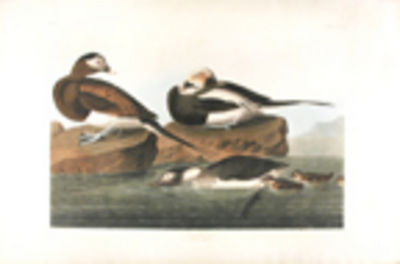 by AUDUBON, John James (1785-1851)
London, 1836. Hand-coloured engraving with aquatint and etching by R. Havell, 1836, paper watermarked "J. Whatman / 1836" From the first edition of "The Birds of America." A fine image contrasting the indolence of the two drakes (one in summer and one in winter plumage) as they bask contentedly on the rocks, with the industry of the female Oldsquaw, diligently scouring the water surface for food, as her three young hurry along beside her, anxious not to stray too far from the protection she affords. One drake goes no further then opening an eye to watch the passing scene, the second raises himself from the basking position, and turns his head for a better view. "Owing to their reiterated cries these birds are named 'Noisy Ducks;' but they have various appellations, among others those of 'Old Wives,' and 'Old Squaws.' Although like all sea-ducks, 'Old Wife' swims deeply, it moves with a grace and celerity, which, if not superior to those of any of its tribe, are at least equal; and when the weather is rough, and the waters agitated, it raises its tail in the same manner as the Ruddy Duck and Pintail. When advancing in smooth water, its speed is such as to cause a considerable swell before it, such as sea-faring persons usually call a 'bone.' Like all others of its tribe, it also prefers swimming against both wind and tide, as then it can sooner take wing if necessary. In calm and pleasant weather...it is fond of throwing its body almost over, and of pluming itself in that position" (J. J. Audubon, Birds of America, New York & Philadelphia: 1840-1844, vol. VI, p.381). "'Long-tailed Duck,' the name applied in England to this smart looking sea duck, was the name Audubon used. Oldsquaw, the colorful North American name, derived from local lore, refers to the bird's talkative habits...Another phonetically derived name for it was 'south-southerly.' Oldsquaws are circumpolar, ranging throughout the arctic and sub-arctic regions of both the New World and the Old, resorting to tundra ponds to raise their families. In winter, except for the Great Lakes...they seem to prefer the salt water of the Atlantic and Pacific. They are easily recognized, in flight over the sea, by their white bodies and totally dark wings, the only ducks so patterned" (R. T. & V. M. Peterson, Audubon's Birds of America, London: 1981, no. 73). Susanne M. Low, A Guide to Audubon's Birds of America, New Haven & New York: 2002, p.163. (Inventory #: 10635)
$18000.00 add to cart or Buy Direct from
Donald A. Heald Rare Books
Share this item
Donald A. Heald Rare Books
Offered by