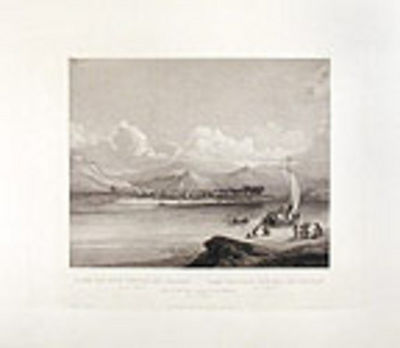 by BODMER, Karl (1809-1893)
[Leipzig: Schmidt and Guenther, 1922. Aquatint engraving by Himely after Bodmer. Small tears to upper margin not affecting plate area. From the scarce Leipzig edition printed from the original copper-plates. Limited in number, the prints from the Leipzig edition are more scarce than, and compare favorably to, the first edition. (David C. Hunt, "Karl Bodmer and the American Frontier," Imprint/Spring 85, p.18) Prince Maximilian and his party left Fort Union on 6 July aboard the 60-foot keelboat Flora and eventually arrived at Fort McKenzie on 9 August 1833. The present view recalls the events of 5th August when the keelboat stopped opposite an Atsina camp at the mouth of the Judith River. The camp contained over 200 tipis and the boat was soon overrun by visitors wishing to trade. The Indians far outnumbered the party of travelers and the situation remained chaotic and tense for a while: Prince Maximilian, in his journal entry for the day noted that `If it was their intention to treat us in a hostile manner, there was no way for us to escape; and how easily might the most trifling dispute with these rude men lead to a breach, by which fifty whites, in the power of eight or nine hundred Indians, would have had no chance. They were therefore treated with much apparent confidence and familiarity, and everything went off very well.' The vessel sailed on as soon as possible. Karl Bodmer's images show great versatility and technical virtuosity and give us a uniquely accomplished and detailed picture of a previously little understood (and soon to vanish) way of life. Swiss-born Bodmer was engaged by Prince Maximilian zu Wied-Neuwied (1782-1867) specifically to provide a record of his travels in North America, principally among the Plains Indians. In the company of David Dreidoppel (Prince Maximilian's servant and hunting companion), their travels in North America were to last from 1832 to 1834. Well-armed with information and advice, the party finally left St.Louis, on the most important stage of their travels, aboard the steamer Yellow Stone on April 10 1833. They proceeded up the treacherous Missouri River along the line of forts established by the American Fur Company. At Bellevue they encountered their first Indians, then went on to make contact with the Sioux tribe, learning of and recording their little known ceremonial dances and powerful pride and dignity. Transferring from the Yellow Stone to another steamer, the Assiniboin, they continued to Fort Clark, visiting there the Mandan, Mintari and Crow tribes, then the Assiniboins at Fort Union, the main base of the American Fur Company. On a necessarily much smaller vessel they journeyed through the extraordinary geological scenery of that section of the Missouri to Fort Mackenzie in Montana, establishing a cautious friendship with the fearsome Blackfeet. From this, the westernmost point reached, it was considered too dangerous to continue and the return journey downstream began. The winter brought its own difficulties and discomforts, but Bodmer was still able to execute numerous studies of villages, dances and especially the people, who were often both intrigued and delighted by his work. The portraits are particularly notable for their capturing of individual personalities, as well as forming a primary account of what were to become virtually lost cultures. David C. Hunt, "Karl Bodmer and the American Frontier," Imprint/Spring 1985, p.18. Cf.Graff 4648; cf. Howes M443a; cf. Pilling 2521; cf. Sabin 47014; cf. Wagner-Camp 76:1. (Inventory #: 15582)
$1200.00 add to cart or Buy Direct from
Donald A. Heald Rare Books
Share this item
Donald A. Heald Rare Books
Offered by