Shounk-Chunk the Black Wolf A Winnebago Chief. Taken at the treaty of Green Bay 1827 by J.O. Lewis 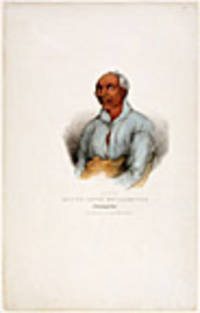 by LEWIS, After James Otto (1799-1858)
[Philadelphia: published by the author, 1835. Lithograph, coloured by hand, printed by Lehman & Duval of Philadelphia. A striking image from Lewis's "Aboriginal Portfolio." The Aboriginal Portfolio represents the first attempt to publish a collection of portraits of North American Indians preceding the works of Catlin, and McKenney and Hall. It is also one of the earliest large projects in American lithography, and one of the first large visual works to deal with subjects beyond the east coast of the United States. The Aboriginal Portfolio was originally published in Philadelphia, for the author, by lithographers George Lehman and Peter S. Duval. It was issued in parts, ten parts of eight plates each being issued; however, due to a loss of subscribers, very few of the last few parts were issued. James O. Lewis was born in Philadelphia in 1799, moved west as a teenager, and had become an engraver and painter by the time he lived in St. Louis in 1820. In 1823 he moved to Detroit, and painted the first of his Indian portraits at the request of Gov. Lewis Cass of Michigan. He accompanied Cass on four Indian treaty expeditions in the Great Lakes region in 1825-27 and painted Indians in the course of each.Virtually all of Lewis's portraits were done at these meetings. Subsequently, many of the Lewis originals were copied by Charles Bird King, and some appeared in the King versions in the McKenney and Hall portfolio. All of the Lewis originals were destroyed in the Smithsonian fire of 1865. The treaty Lewis refers to as the Treaty of Green Bay was the Treaty of Butte des Morts, 1827. On this treaty is the mark of "Shoank-tshunksiap" Black Wolf, a Menominie, presumably the man here portrayed as a Winnebago. Cf. Bennett, p.68; cf. Eberstadt 131:418; cf. Field 936; cf. Sabin 40812; cf. Howes J135; cf. Reese, Stamped With A National Character 23. (Inventory #: 17730)
$750.00 add to cart or Buy Direct from
Donald A. Heald Rare Books
Share this item
Donald A. Heald Rare Books
Offered by