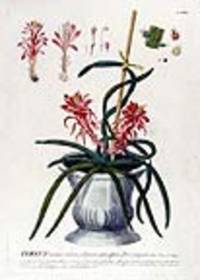 by EHRET, After George Dionysius (1710-1770)
[Nuremberg], 1773. Engraving, coloured by hand, by J.J. or J.E.Haid. Very good condition apart from some overall light soiling. A very fine image from Trew's "Plantae Selectae," one of the greatest of all eighteenth-century botanical books, drawn by the greatest of eighteenth-century botanical artists, George Dionysius Ehret. Linnaeus wrote to Trew, in Latin, that "The miracles of our century in the natural sciences are your work of Ehret's plants...[N]othing to equal them was seen in the past or will be in the future." Christoph Trew, a physician and botanist, had for a number of years been an admirer of Ehret's work. Ehret, a brilliant botanical artist, was unrivalled in his ability to "achieve realism, majesty, ineffable colour, all in one breathtaking look" (Hunt). Born in Heidelberg in 1710, he originally worked as a gardener and practised drawing in his spare time. His artistic abilities led him to the service of a Regensburg banker named Leskenkohl, and it was during this period that Trew met Ehret. Trew was to remain a friend and patron of Ehret's throughout his life, and by 1742, the germ of what was to become the present publication was already under discussion when Trew wrote to Christian Thran in Carlsruhe "Every year I receive some beautifully painted exotic plants [by Ehret] and have already more than one hundred of them...." Ehret moved to London in the late 1730s, where he painted the recently introduced exotics at the Chelsea Physic Garden and established himself as a teacher of flower-painting and botany. Discussions about the projected work continued by letter until 1748, when Johann Jacob Haid from Augsburg agreed to produce the engravings from Ehret's drawings. Gerta Calman, Georg Ehret, Flower painter Extraordinary (1977), p.97; Dunthorne, 309; Great Flower Books (1990), p.144; Hunt, 539; Nissen BBI ,1997; Pritzel, 9499; Stafleu & Cowan, TL2, 15.131. (Inventory #: 13778)
$900.00 add to cart or Buy Direct from
Donald A. Heald Rare Books
Share this item
Donald A. Heald Rare Books
Offered by