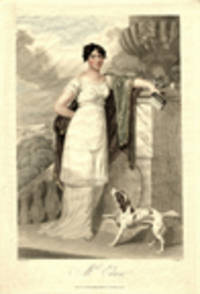 by CRAIG, William Marshall engraved by R. ROFFE
London: Published by Edward Orme, Bond Street, 1815. Colour printed aquatint. Printed on wove Whatman paper, watermarked 1815. In excellent condition. Image size: 13 3/8 x 9 1/16 inches. This is a charming portrait of Mrs. Edwin by the celebrated miniature painter William Marshall Craig. Mrs. Edwin was a Regency actress, whose parents had both been in the theatre and who began her career in Dublin. She appeared as Beatrice in As You Like It, and other prominent roles. William Marshall Craig was one of the most celebrated miniature-painters of his day. Through his considerable skill he became drawing-master to Princess Charlotte of Wales, miniature-painter to the Duke and Duchess of York, and painter in watercolours to the queen. In addition to exhibiting regularly at the Royal Academy he became one of the principal engravers for a large "Scripture Illustrated" published in 1806. This delicate colour printed portrait, engraved by R. Roffe, is a wonderful example of his considerable skill. Not in O'Donoghue. (Inventory #: 12899)
$375.00 add to cart or Buy Direct from
Donald A. Heald Rare Books
Share this item
Donald A. Heald Rare Books
Offered by