Edinburgh, From the Castle 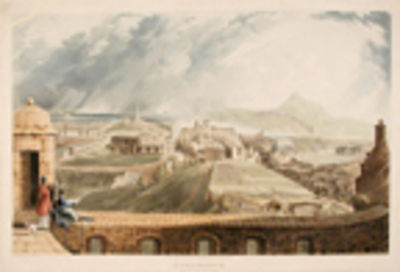 by SUTHERLAND, Thomas (b. 1785) after John GENDALL (1790-1865)
London: Published by R. Ackermann's Repository of Arts, 1824. Hand-coloured aquatint. Very good condition apart from some overall light soiling, minor foxing, and mild matburn in the margins. A skillfully repaired 3/4" tear in the top left corner. Trimmed to within platemark on all sides. A scenic view of Scotland's capital, from a set of four prints of Edinburgh. The ancient city of Edinburgh on the east coast of Scotland has a long and eventful history that dates back to the Bronze Age. Perched on top of an elevated volcanic rock, its impressive castle is the city's focal point and was built by King Malcolm III Canmore in the eleventh century. By the late sixteenth century, Edinburgh was a thriving city and was established as the capital Scotland and the chief site of the royal court. Although no longer the royal seat when James VI of Scotland ascended to the English throne in 1603, effectively uniting the crowns of Scotland and England, it retained its own Parliament for many years. The city continued to prosper during the Enlightenment, although its Parliament ceased to exist when the Act of Union was instituted in 1707. During this period, Edinburgh underwent a significant architectural expansion, and the beautiful Georgian buildings, which characterize the city, were erected. Born in Devon, John Gendall moved to London in 1811 at the behest of Sir John Soane, who introduced him to the prolific print-publisher and bookseller Rudolph Ackermann. He worked for Ackermann for several years, conducting various experiments in the art of lithography and contributing numerous illustrations to the firm's various publications and topographical series. A number of his sketches and watercolour drawings were engraved and published as aquatints by the draughtsman Thomas Sutherland. Gendall continued to paint landscapes (mostly of Devonshire) after leaving Ackermann's employment, and he regularly exhibited his works at the Royal Academy until 1863. Cf. Benezit, Peintres, Sculpteurs, Dessinateurs et Graveurs, Vol. 13, p. 375; cf. Dictionary of National Biography. (Inventory #: 12930)
$2000.00 add to cart or Buy Direct from
Donald A. Heald Rare Books
Share this item
Donald A. Heald Rare Books
Offered by