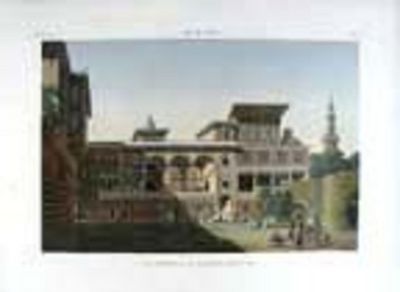 by [DESCRIPTION DE L'EGYPTE]
Paris, 1830. Copper engraving, with later professional hand-colouring. Very good condition apart from a few mild surface abrasions in the top margin and lower left corner of the plate mark, a 1/2" tear in the right margin, and some very minor foxing in the margins. A fine plate from 'Description de l'Egypte', the seminal publication by the French government detailing the results of the Napoleon's pioneering military and scientific expedition to Egypt (1798-1801) and the first comprehensive illustrated description of ancient and modern Egypt. In 1798, Napoleon embarked on his legendary expedition to Egypt with the ambition of wresting control of the region from the Turkish Empire and 'opening' the enigmatic kingdom to the West. Conquering Egypt, the geographical centerpoint in the axis of trade between Europe, India and the East, was an integral part of Bonaparte's strategic plan for global domination. Among the numerous civilians accompanying him, were the 'savants', leading French scholars, artists, scientists, engineers and technicians, whom he commissioned to compile a thorough survey of every aspect of Egypt that could later be used in planning the country's future shape. The survey was divided into various sections detailing the antiquities, modern architecture, natural history and topography of Egypt and coordinated by the 'l'Institut de l'Egypte' with a view to publication. Following the defeat of the French army, the 'savants' returned to France where a committee was established to edit and supervise the work's production. Begun under Napoleon in 1809, 'Description de l'Egypte' was finally completed in 1830. Although not a military success, the expedition and the resultant 'Description', were a scientific and cultural triumph considered by many to be the "Birth of Egyptology". Prior to Napoleon's invasion, access to and knowledge of Egypt, its culture and antiquities, were limited to the objects brought to Europe by the Romans and nineteenth-century merchants. The exquisite plates from this voluminous and invaluable work provided the first true glimpse into a once mysterious land and indelibly influenced how the west perceived Egypt. This particular plate is from the volume entitled 'Etat Moderne', which detailed important examples of Egyptian architecture constructed after the seventh-century Arab invasion. (Inventory #: 10667)
$595.00 add to cart or Buy Direct from
Donald A. Heald Rare Books
Share this item
Donald A. Heald Rare Books
Offered by