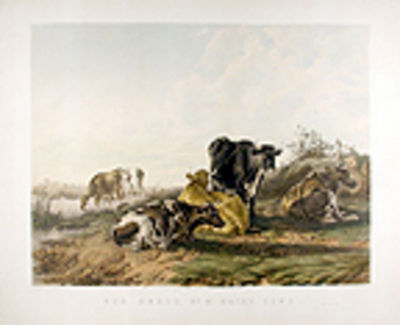 by COOPER, Thomas Sidney (1803-1902) & J. West GILES (lithographer)
London: E. Gambart & Co, 1851. Hand-coloured lithograph. Very good condition apart from some light soiling, mild rippling, and a few small losses at the edges of the top and left margins. A charming plate after a work by one of the most prominent nineteenth-century animal painters. Strongly influenced by the seventeenth-century Dutch landscape and animal painters like Aelbert Cuyp, Thomas Sidney Cooper was one of the most prolific and eminent animal painters of his time. As a young boy, he showed a remarkable aptitude for drawing, and he trained with the scene-painter Doyle while completing an early apprenticeship with a coachbuilder. After brief stints as a coach-painter, draughtsman, and scene-painter, he moved to London in 1823, where he began to sketch works in the British Museum. Although admitted to the Royal Academy schools, he was unable to attend due to financial constraints and moved back to Canterbury, where he worked as a drawing instructor. In 1827, he moved to Brussels, where he established a coterie of students and befriended Eugène Verboekhoven, whose animal paintings strongly influenced his early endeavors. It was during this period that Cooper first began to experiment with oil painting and completed several series of cattle lithographs, which were issued by various publishers including Ackerman. Cooper returned to London in 1831, where he exhibited at acclaimed venues including the Suffolk Gallery and the British Institution. His reputation grew after his cattle paintings were exhibited at the Royal Academy in 1843-45, and he was elected Associate Royal Academician in 1845. In addition to his intimate bovine studies, he also painted animals into the landscapes of other artists including Frederick Lee, R.A. and Thomas Creswick. Despite various attempts to experiment with other genres, Cooper's thematic mainstays remained cattle and sheep throughout his life. By the 1870s, he was inundated with profitable commissions, and many of his works were engraved and copied in order to meet public demand. Cf. Dictionary of National Biography. (Inventory #: 12705)
$1100.00 add to cart or Buy Direct from
Donald A. Heald Rare Books
Share this item
Donald A. Heald Rare Books
Offered by