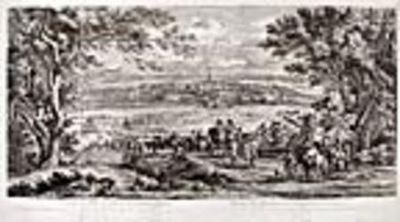 by MEULEN, After Adam Frans Van der (1632-1690)
Paris: distribuë par l'Auteur, en l'Hostel des Manufactures des Gobelins, et en la rue St.Jacques, 1685. Copper engraving, on two joined sheets, after Van der Meulen. Titled in French and Latin. In excellent condition. Some infill work along the bottom margin. Image size: 18 1/2 x 38 5/8 inches. A striking contemporary view of Gray in Franche-Comte, by the celebrated court painter Van der Meulen. This fine view shows the town of Gray in Franche-Comte, built on the banks of the Saône River. One of the most important trading towns in Franche-Comte, the region became a possession of the Spanish Hapsburgs in 1556. Although some of the region's fortified towns were occupied by France during the Wars of Religion, peace and prosperity continued until the advent of the Thirty Years War, when the region was ravaged by both Catholics and Protestants. Louis XIV conquered Franche-Comté in 1668 and again in 1674 and finally obtained its cession from Spain. Van der Meulen's striking image depicts the king and his armies entering the town after they successfully re-conquered the region. Adam Frans Van der Meulen was a landscape and genre painter, who specialized in battle scenes, and his early works, i.e. those from the years before he left for Paris (the earliest dated work is from 1653) are mainly cavalry skirmishes in the manner of his teacher Pieter Snayer. After he moved to Paris, the character of his work changed and became more ceremonial. He now specialized in large topographical views and military scenes and in royal journeys, processions and receptions. His most important task was to accompany the king on his many campaigns during the wars of conquest waged in the 1660s and 1670s against, inter alia the Spanish Netherlands, and as Peintre de conquêtes du roi officially to portray the memorable sieges, battles and conquests of le Roi Soleil in large-scale canvases or cartoons which were later transformed into tapestries. Van der Meulen was born in Brussels, where he was baptized in 1632. In 1646 he was apprenticed to the battle painter Pieter Snayers. In 1651 he became a master in the Guild of St. Luke in Brussels but by 1663 he had moved to Paris where he joined a group of Netherlandish artists associated with the French painter Charles Le Brun (1619-90), who not only was Premier peintre du roi, but also (from 1663) director of the Parisian tapestry manufactory Manufacture royale des Gobelins. Van der Meulen quickly became a protégé of Le Brun, and on his recommendation Van der Meulen was appointed court painter to Louis XIV on 1 April 1664 and at the same time became Le Brun's collaborator in the tapestry manufactory. In 1673 he was accepted as a member of the Académie royale de Peinture et de Sculpture without any obligation to submit a morceau de réception; in 1681 he became conseiller and in 1686 premier conseiller. He died as a highly esteemed artist in the Hôtel des Gobelins 15 October 1690. (Inventory #: 16903)
$1750.00 add to cart or Buy Direct from
Donald A. Heald Rare Books
Share this item
Donald A. Heald Rare Books
Offered by