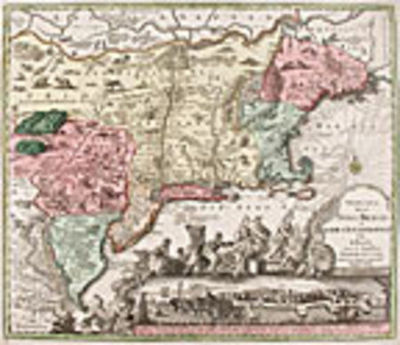 by SEUTTER, Matthäus (1678-1757)
Augsburg: Matthäus Seutter, 1740. Copper-engraved map, with full original colour, in very good condition. An excellent example of the third state of Seutter's important map of the American northeast with the famous 'Restitutio' view of New York City A fine example of one of the much-pirated Jansson-Visscher New England series of maps, first published by Visscher in 1651. The present plate was first published by Seutter in 1730, and `is the first map in the [Jansson-Visscher] series to show ... the boundaries of Massachusetts, New England, New York, New Jersey and Pennsylvania.' There are three states with Seutter's imprint: the first with no mention of his imperial appointment, and the second state mentioning that he is Imperial geographer. In the third state (as here), dating to 1740 onwards, the title has been altered again, this time to include mention of the privilege that he has been granted. After Seutter's death his son-in-law, Tobias Conrad Lotter, inserted his own name and three further states were published. To this map of the northeast is added the famous Restitutio View of New York City, which celebrated the brief return to Dutch governance from late 1672 until February of 1674. This is one of the earliest views of the city. Adorning the inset view is a very elaborate tableau in which the Emperor, Charles VI, is shown attended by Hermes, god of commerce, Athena, goddess of wisdom, and Hera, who is standing over a chest of gold coins. Behind the divine beings, dark skinned workers of the world carry nature's products to lay at the Emperor's feet. Matthäus Seutter was one of the most important German mapmakers of the eighteenth century. Born in Augsburg in 1678, he became an apprentice to the renowned cartographer Johann Baptiste Homann in Nuremberg. In 1707 he established himself as a map publisher in Augsburg, and quickly became Homann's main rival. His business flourished and by 1731 he was appointed Geographer to the Imperial Court. Asher, A List of the Maps and Charts of New Netherland, 20, p.16; Campbell, The Jansson-Visscher Maps of New England, 26; cf. McCorkle, New England in Early Maps, 730.5 (1st state, but briefly noting later states); cf. Stokes, The Iconography of Manhattan Island 1498-1909, plate 16b and p.223 (1st state); Tooley,The Mapping of America, 26, p.291. (Inventory #: 16950)
$4250.00 add to cart or Buy Direct from
Donald A. Heald Rare Books
Share this item
Donald A. Heald Rare Books
Offered by