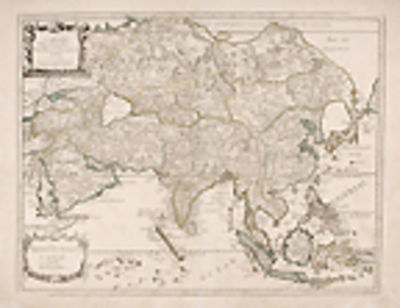 by DU VAL, Pierre (1618-1683)
Paris, 1684. Engraved with period outline colour. Good condition, expertly repaired split at centerfold and parallel tear from the base. Mild toning due to age. Small crease lower left. Pierre Duval was Nicholas Sanson's nephew, and his work was primarily editing and augmenting Sanson's innovative cartography. He and Hubert Jaillot were most important in bringing Sanson's work to the world, both in improved editions and in bringing to print previously unpublished manuscripts. This map of Asia bears the characteristic clarity and more "scientific" air of the 17th-century French map. Though many sites are mis-located, a vast amount of material has been examined and assessed. Most placenames represent geographical entities that currently exist or once existed. The rendition of the lower islands of Japan and the peninsula of Korea are improved over earlier studies. Details of the Great Wall of China are also visible. This map, dated 1684, was issued by Pierre's daughter, "Mlle." Duval, the year after his death. Pastoureau, Duval II E, (9). (Inventory #: 10286)
$1800.00 add to cart or Buy Direct from
Donald A. Heald Rare Books
Share this item
Donald A. Heald Rare Books
Offered by