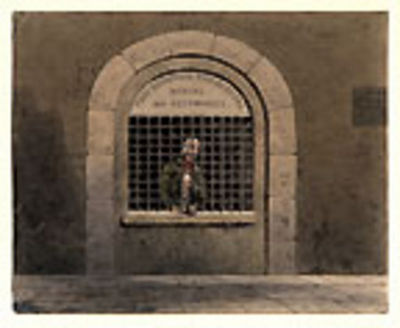 by SHEPHERD, Thomas Hosmer (1793-1864)
1830. Watercolour. Signed l.l. "T. Hosmer Shepherd" In excellent condition with bright fresh colour. Lower left corner has been expertly in-filled where a small section of paper was missing. A fine watercolour of a debtor in Fleet Street Prison, by the celebrated English painter Thomas Hosmer Shepherd. Virtually en grisaille, this is an exceptionally carefully drawn watercolour of the grille on Farringdon Street, built into the wall of Fleet Prison so that inmates could beg passersby for coins. Over the grille in the lunette formed by the arch are the words: "Pray Remember Poor Debtors Having No Allowance". A gray haired man stands and calls out to the empty sidewalk. Fleet Prison was run for profit, and the wardens and guards basically lived by extorting the prisoners, who had to pay for room and board. They were subject to all sorts of mistreatment. Fleet Prison was built in 1197, burnt down and re-built several times, finally closed in 1844 and demolished in 1846. Thomas Hosmer Shepherd was one of the most esteemed watercolourists of his day. An industrious painter and draftsman, Shepherd produced a wealth of images illustrating street scenes and old buildings in London. His handsome paintings combine a natural quality attentive to detail, making them some of the most appealing views of the metropolis. Shepherd worked almost exclusively for the eminent publisher Frederick Crace. His illustrations grace the pages of some of the era's most important texts, including "Metropolitan Improvements, or London in the Nineteenth Century", "A Picturesque Tour of the Regents Canal", and "London and its Environs in the Nineteenth Century". Dictionary of National Biography. (Inventory #: 16103)
$1250.00 add to cart or Buy Direct from
Donald A. Heald Rare Books
Share this item
Donald A. Heald Rare Books
Offered by