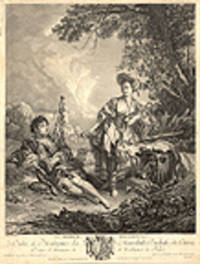 by BOUCHER, François (1703-1770) engraved by Robert GAILLARD (1722-1785)
Paris: chéz L'Auteur reu St. Jacques au dessus des Jacobins, 1760. Engraving. Printed on laid paper with watermark. In excellent condition with the exception of some light foxing. Creases on side and bottom of sheet where it has been folded. Trimmed within the platemark on the upper margin. Image size: 17 1/4 x 14 3/16 inches. A lovely pastoral print after the celebrated French Rococo artist Francois Boucher. Francois Boucher (1703-1770) was one of the most versatile and influential French artists of the eighteenth century. He not only decorated palaces and private residences, but also painted portraits, landscapes, and mythological scenes; and designed opera sets, porcelains, and tapestries. He was a prolific painter and draftsman and he excelled in cabinet-sized paintings for collectors, many of which were reproduced in print in an effort to satisfy the demands of eager connoisseurs. He began his career producing reproductive engravings of Watteau's paintings, but he quickly became one of the most fashionable artists in Paris. He was favoured by the King's mistress, Madame du Pompadour, and quickly became "premier peintre" to Louis XV. Boucher rejuvenated the 'pastoral tradition' in French art, and was instrumental in developing the Rococo style which characterized French art during Louis XV's reign. This sublime print by the Parisian engraver Robert Gaillard is an evocative example of Boucher's sumptuous style of painting. A reclining shepherd has been playing the pipes beside the path where a pretty peasant girl passes by. They share a powerful gaze, and the girl offers him a wreath of spring flowers. The image is strikingly vibrant. Le Blanc, Manuel de L'Amateur D'Estampes, p. 261, no.27. (Inventory #: 10032)
$750.00 add to cart or Buy Direct from
Donald A. Heald Rare Books
Share this item
Donald A. Heald Rare Books
Offered by