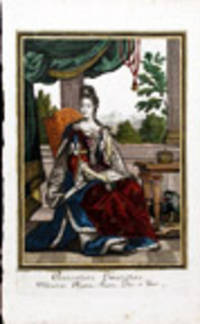 by LEOPOLD, Joseph Friederich (1668-1726)
Augsburg: Published by Martin Engelbrecht, 1745. Engraving with thick early colour with gold highlights. Printed on laid paper. In excellent condition with the exception of some minor foxing in the margins. Image size: 10 1/8 x 7 1/8 inches. A lovely portrait, with stunning early colour, of the Queen of Poland, Christina Ewartina, by the celebrated Augsburg engraver Martin Engelbrecht. Christiane Eberhardine, called here Queen of Poland, was the wife of Frederick Augustus of Saxony, who became King of Poland in 1697 as Augustus II. The law of Poland required that its King be Roman Catholic, and Augustus promptly converted, Christiane however was an ardent Lutheran and refused. She left her extremely promiscuous husband (who sired hundreds of illegitimate children) and lived at a pleasant castle raising her son until she died in 1727. Upon her death, Bach composed a funeral cantata. Joseph Friedrich Leopold was an Augsburg engraver, who made this print of the popular Queen of Saxony while she was still alive (as he pre-deceased her). The handsome Queen sits before an open view of snowcapped mountains. On a table beside her is, perhaps, the crown of Poland she put aside in favor of her faith. (Inventory #: 15089)
$350.00 add to cart or Buy Direct from
Donald A. Heald Rare Books
Share this item
Donald A. Heald Rare Books
Offered by