Dragon Fountain, in the Gardens at Eaton Hall 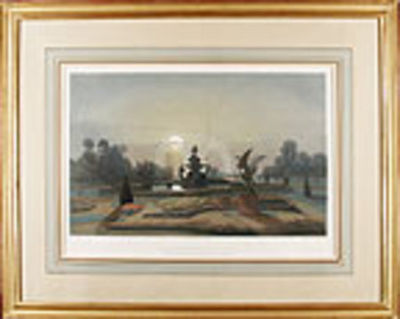 by BROOKE, After Edward Adveno (1821-1910)
London: Published by T. McLean, 1857. Colour-printed lithograph. Very good condition apart from a small chip in the lower right corner of the frame. A stunning night view of the gardens at Eaton Hall, Cheshire, from the "The Gardens of England." Published in 1857, The Gardens of England is a series of 24 plates with accompanying text depicting the diverse luxuriant gardens of various distinguished English mansions. The mid-nineteenth century was a period during which the traditional aesthetics of garden design underwent a significant change in England, as innovative ideas and concepts were being continually introduced and explored. Brooke's publication embodies the eclectic nature of Victorian garden design and constitutes an important visual survey of the varied styles that were popular among the wealthy and fashionable. Designed under the guidance of the Duke of Westminster, the picturesque garden of Eaton Hall, with its geometric parteres, medieval statues of knights and maidens, and Gothic arches, combined elements of the English formal garden with features of the medieval garden, the latter of which complemented the neo-Gothic castle in which the Duke resided. His gardens are pictured here in a dusky light that imbues the scene with an aura of romanticism and theatricality. The dramatic reflection of the moon's brilliant light in the waters of the dragon fountain, emphasizes the fountain's importance as the dominant visual centerpiece of the garden. Little is known about E. Adveno Brooke, other than that he exhibited at the Royal Academy and British Institution between 1853 and 1864 and his most significant publication was The Gardens of England. Cf. Abbey, Scenery of Great Britain and Ireland 392; cf. Benezit, Dictionnaire Des Peintres, Sculpteurs, Dessinateurs et Graveurs, Vol. 2, p. 842. (Inventory #: 13551)
$1750.00 add to cart or Buy Direct from
Donald A. Heald Rare Books
Share this item
Donald A. Heald Rare Books
Offered by