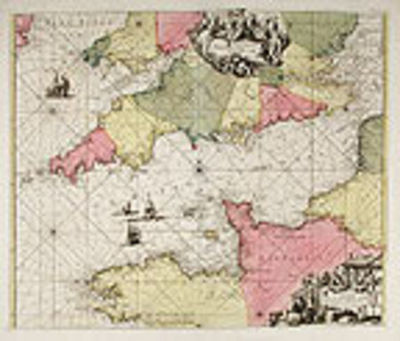 by RENARD, Louis (1678-1746)
[Amsterdam: Renard, 1739. Copper-engraved sea chart, with full orginal colour, in very good condition. A highly decorative sea chart of the English Channel, by the master-engraver Renard. The marine atlases of 17th and 18th century Holland were best sellers. The nation that led the world in overseas commerce also led in the arts of engraving and cartography. Plus, there was a large audience of mariners and mariners' parents, who needed to study the obscure straits and recently discovered island groups their sons were seeing. Louis Renard (1678-1746) was from a Huguenot family. He moved from France to the Netherlands and became a book dealer and publisher in Amsterdam in 1703. Louis Renard first published Atlas de la Navigation, et du Commerce qui se fait dans toutes les parties du monde in 1715. It was re-issued unchanged by the Ottens in 1739. The charts were printed from plates made by Frederick de Wit in 1675, Orbis Maritimus ofte Zee Atlas. These were corrected by Renard, using, primarily, van Keulen. Koeman, Atlantes Neerlandici, Ren 1. (Inventory #: 13984)
$2400.00 add to cart or Buy Direct from
Donald A. Heald Rare Books
Share this item
Donald A. Heald Rare Books
Offered by